Welcome to our 16th Percolation Nation! This blog highlights our ☕Ko-fi backers' generous contributions for the month of March, 2021! ICYMI, we detail the benefits of supporting us on Ko-fi in our first-ever Percolation Nation. 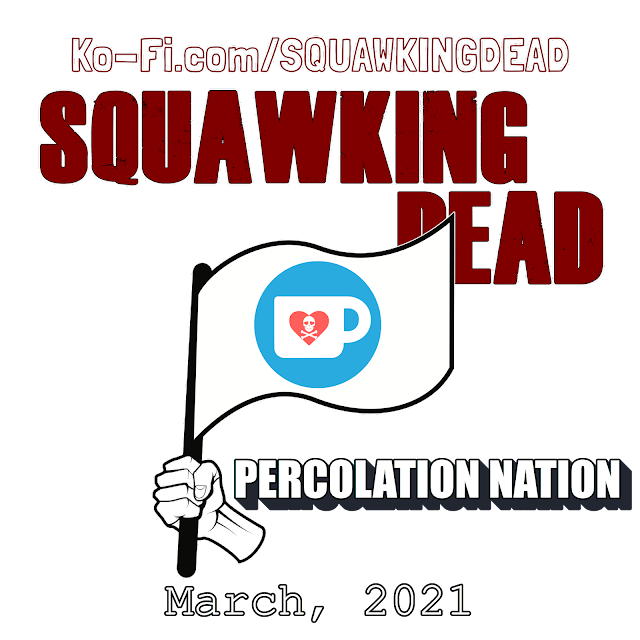 And here we thought we wouldn't have anything to talk about! In this Princess-centric episode, we go through the depths of her psyche by way of her assigned archetypes, and even find reasons to belly-laugh about some of the ideas we thought up... because, is this SQUAWKING DEAD episode even real? 👀
...one thing we know for sure: Watch #TalkingDead this Sunday!
We definitely cut out a lot in the pre-show & post-show, for VERY good reason! If you want a copy of the Unedited Episode Recordings - or just want join us during our next Recording Session - all while supporting this #podcast, Click Here!
Buy our NEW Ringtone!

Father Gabriel goes Next-Level Stoicism, while Aaron assumes the burden of hosting both his and the padre's soul. While reacting to the shock, drama, and some funnies, we still had a lot of questions that begged answering.
CHRIS, from BMNY DeadCast Live, is BACK after a very long hiatus (both from SQUAWKING DEAD and his own channel) and we're honored to be the ones to ease him back into online life after a heck of an anniversary since the start of...stuff n' thangs.
A TON of preshow in the Unedited Episode Recordings for you to grab with MANY behind-the-scene takes that were definitely too hot to make the final cut! How do you get it? Buy supporting us, of course! And, best of all: you, too, can lend us your thoughts during our recording sessions! Click here!

We went through most of the hype, drama, and anticipation for this week's episode in last week's #podcast. Breaking down this episode has been quite the trip, as we discover how much consideration the writers and show-runner, #AngelaKang, has had for #DarylDixon's development for quite a while, now!
Consider supporting us! You receive Early Access to this and future Unedited Episode Recordings, as well as the ability to lend your insights into future Recording Sessions - along with some other neat perks: Click Here!

WE'RE BACK covering THE WALKING DEAD, again! In it's own weird way, #TWDx has been a reflection of where we are in society: It's the longest season of #TWD and has gone through quite the evolution. So it goes, this episode deals a lot with "rebuilding", but also "acknowledging" the past and reconciling the two.
We cut out a LOT from this episode! "...but where can one get the raw, unedited episode recordings," one might ask? Well look no further: for these and the chance to lend your insights in future recordings - all while supporting this #podcast - Click here!