[Episode 82] #WSCAtlanta2019: An Interview with Greg Nicotero (with Recap)

Recorded 10/19/2019 at Walker Stalker Con (Atlanta)
O.G. SQUAWKING D. Carol G. sits down with #TheManTheMythTheLegend himself, #GregNicotero!
BONUS: those of you have bought us a Coffee should've already received links to the RAW, Unedited version of this podcast! 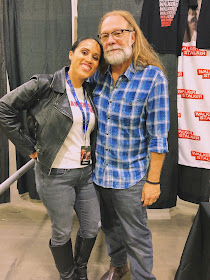 Typically, I'm the type of person who likes her life PLANNED.  And when it come to this past October's Walker Stalker Con in Atlanta, we, as a podcast, did our best to maximize our time by planning out our time and dividing and conquering.  When it came to the interviews, we tried to schedule as much as we could ahead of time and by the time the convention rolled around, we were able to secure one interview (with the hilarious Mo Collins).

Still, there is something to the old adage of the squeaky wheel gets the grease and the whole mantra of you never know until you ask.  Case in point, during Walker Stalker Con in the fall, at one point, myself and one of our podcasters decided to do a lay of the land and get a few photos and/or photographs.  We saw that the line for Greg Nicotero (zombie horror visual effects extraordinaire) at that particular moment wasn't TOO crazy, so we decided to jump in when we could.  Once I got up to the front of the line, I passed him my final issue of The Walking Dead comic, since the front artwork is a perfect backdrop of signing.  He asked me what I wanted on the cover to which I retorted, you're the man, whatever you want!  He then went on to draw a little walker/zombie face on my comic, quickly but ever so clearly.

After he finished his drawing and signed it, I decided to go for it: I introduced myself to him as a member of our podcast dedicated to all things Walking Dead related and asked him if he had a few minutes or a moment to spare for a quick interview.  He looked at the line that was building up and said that it wouldn't be fair to me or the fans if he spoke to me now HOWEVER, if I'd be willing to hang around and wait until things died down, then we could chat.  IT WAS A DEAL. 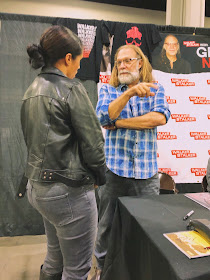 So I waited and walked around, visited some vendors, got a snack, essentially tried to find as many ways to fill in the time as I waited patiently for my opening.  After what was likely between 1 and 2 hours of time lapsing, the crowd (finally) dissipated and I got my cue to pull up a chair.  I immediately walked over, sat down and our conversation began.  I asked him about his background and journey in horror visual effects, from the sets of Romero to the sets of The Walking Dead, I asked him about his advice to those looking to work BEHIND the camera on set design, make up, special effects, etc.  With every question, Greg Nicotero calmly took the time to answer thoughtfully, all the same time using his own past as an example and a basis for his response.   It was not only an interview, but a life lesson discussion on the industry from a master veteran.

And to think, all of this came from a simple question, asking him if he could spare a moment.  Here's hoping you all enjoy hearing from a master at his craft as much as I did.