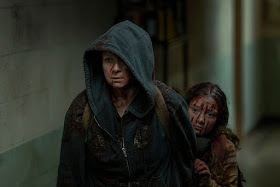 During the second episode of season 10 of The Walking Dead, entitled “We are the end of the world”, we slow down the pace considerably from the season premiere and focus in on only The Whisperers.  Specifically the dynamic and origin story of Alpha and Beta, as well as the introduction of Gamma (Welcome Thora Birch!).  Typically, I’m not a big fan of what are commonly known as “bottle episodes” where we don’t a get a chance to see most of our cast, however, in this particular case, the story is so enthralling that we do not even notice (or mind for that matter) the isolated tale.  This story is beyond just about the Whisperers but rather more about mothers and daughters and how the loss of a child can send a mother into an absolute tailspin, no matter how strong of a character. 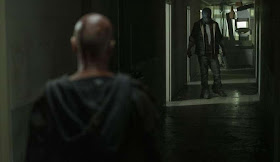 The episode flashes back and forth between the present day state of business with the Whisperer and with a time period approximately (6) years in the past, when Alpha was on the run with a bigger Lydia (no longer a baby but seemingly about 10-11 years old at that point).  After witnessing a particular gruesome death (man, I’m so used to everyone being so martial by now that I forget that there were a lot of civilians completely ripped apart by walkers in the early stages of the apocalypse…DAMN), Alpha and Lydia seek refuge in what is apparently a mental institution guarded by a large formidable man with a large machete (who we have now become to know as Beta).  What follows is a negotiation by Alpha that convinces Beta to allow them to stay, for one night, before moving on to another location.  It’s in these memories, we see still a strong Alpha…but also one that undeniably loves her daughter.  We see a woman who gently bathes her daughter and carries around her toy bunny rabbit, while at the same time trying to convince her daughter that she needs to toughen up.  Lydia, being a child eager to please her mother, WANTS to toughen up and even tells her mother Alpha that she aspires to be strong like her. 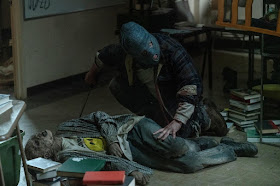 Nothing pleases Alpha more.  However, in Lydia’s eager state, she proceeds to run off and face her fear of walkers inside the institution herself, covering herself in walker guts (the old trick).  This incites a frantic search in the building by Alpha, even after being warned by Beta not to overstep her bounds.  Eventually she stumbles across an office that has a photo of two gentlemen, each with their faces scratched off, one clearly has the stature of Beta and the other is a smaller man with a “Have a Nice Day” t-shirt.  It’s at this point that Beta comes in attacking Alpha who kills off the walker that stumbles in with the t-shirt on but all the carnage comes to an abrupt stop when Lydia surprisingly enters the room.

Alpha is deliriously happy that Lydia is alive and well (although she got a MAJOR talking down to for disappearing on her like that) but Beta is clearly crestfallen that this man has been put down (was he friend?  A son?  A coworker?).  Alpha ends up taking this opportunity to lure Beta toward her side, convincing him that they can all coexist together and survive among the dead (particularly since they were able to kill so many walkers together).  She seems to do a good job convincing him based on the fact that they are currently united, six years later, and with that he removes the man's shirt and face and voila!  Beta is born. 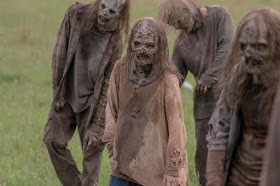 This all provides a critical backdrop and comparison point for the current state of affairs where Alpha and Beta now lead a pack and while Beta might’ve been doubtful of Alpha in the past, he now follows her without question.  But it’s during a “routine” day of trying to gather more walkers that we notice that one of the two females with him (who Alpha refers to as the “sisters”) is acting a little…off.  Through more flashbacks, we realize that this particular female Whisperer was the one who reluctantly laid down her baby in the field, as per Alpha’s orders, when they first confronted our heroes.  She seems to be dealing with a certain level of PTSD from that incident and in her state, she puts the pack at risk by effectively blowing their cover.  While Beta wants to murder this woman immediately upon returning to their site, Alpha has mercy on her, potentially because she can relate to the feelings involved with the loss of a child, from a mother to mother standpoint. 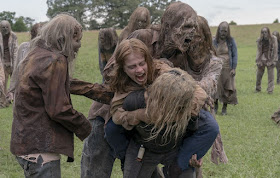 This mercy does not last long because when the pack is back at it trying to herd their walkers, they notice the fallen satellite streaking through the sky.  I appreciated this moment because it very clearly gave us as viewers a definitive idea of where we are in the timeline of events and we are clear that these events are occurring concurrently, while our heroes are experiencing their issues (and eventually battling the wildfires).  In any case, the noise of this satellite causes confusion among the walkers who start to scatter.  It’s at this point that this Whisperer female sees a walker stumbling around with a baby Bjorn stuck to its chest.  This moment causes the Whisperer female to have a complete mental breakdown and she removes her mask…and charges at Alpha, fully jumping on her back in the process.  But it’s at this point that rather than defend her sister, the other Whisperer sister pulls her off and essentially dumps her to the walkers, killing her instantly.

She cant say she didn’t warn her sister to control herself and self-preservation is a very real thing in this post-apocalyptic world.  But for this, she is rewarded by receiving a ranking and being anointed by Alpha as “Gamma”, something that seems to irk and rattle Beta.  Threatened much?  It literally feels like a child vying for his mother's attention and being incredibly jealous of having to share the spotlight with anyone else. 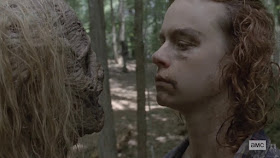 The major scene as far as I’m concerned however, is more toward the very end when Beta confronts Alpha in her secret area that very much resembles a nest (a bit literal in representation but understood).  It’s in this moment that we get a rare glimpse of the vulnerability and love that Alpha apparently STILL HAS for her daughter Lydia.  Beta seems to be stunned that Alpha did not kill Lydia the way everyone THINKS she did but Alpha tearfully retorts that she COULDN’T ever kill her because that was her BABY.  How could he expect her to kill her, she tearfully pleads from him?  All the while, clutching Lydia’s old toy bunny.  We witness her internal struggle, eventually spilling into the external, as she completely destroys her nest and all hope of having Lydia back underneath her wing.

By the end of the episode, Alpha resets herself and realigns with Beta to focus on the task at hand of making sure our heroes are clear on the parameters of their borders.  Particularly when she has her stare down with Carol at the very end of the episode (which also happens to be how we ended last week’s season premiere). 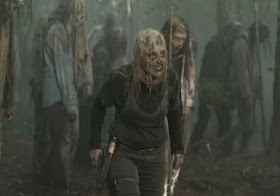 But now that Alpha’s vulnerability is exposed and known to at least Beta, how will that influence her decision making?  Can be Beta FULLY be trusted to not divulge or take advantage of Alpha’s weaknesses?  And is Gamma a true “believer” or merely a survivor looking to get by until a better opportunity presents itself (or an opportunity to overthrow Alpha presents itself)?

Only time will tell…