[PREDICTIONS] Season 9, Episode 15 of The Walking Dead, "The Calm Before" 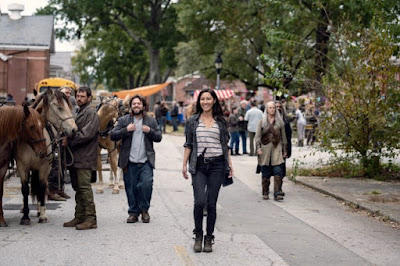 Typically, I would be sitting here writing up a recap of what we just saw on the The Walking Dead, but this is a special blog post focusing on my PREDICTIONS for tomorrow's extremely critical episode entitled, "The Calm Before".  While the title of this episode seems to give the illusion that this will be more of a "set-up" episode, I am predicting that some major events from the comic will finally come to fruition during episode 15.  Before moving any further, please note that this posting will include MAJOR SPOILERS therefore if you want to be surprised tomorrow night I would recommend to stop reading right NOW.  Otherwise, you've been warned... 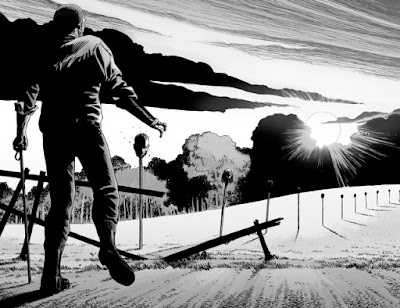 In the comics, the fair is a very significant event because it is where the Whisperers infiltrate the festivities as normal, average visitors.  By the time it's all said and done, we come to find out that Alpha and her crew have brutally murdered 12 attendees and have placed their heads on pikes that they use to create a border between their area and everyone else's land.

In the comic, it is Rick, Andrea and Michonne that come across the heads on pikes over a hill.  Obviously, Rick is no longer on the show (for NOW, more on my thoughts on THAT in a moment), so it'll play out a little differently, but I would imagine that the general story line will remain the same.  Based on some photo stills from the episode, I'm thinking that Daryl and Yumiko will be the ones that find the Heads on Pikes Border. 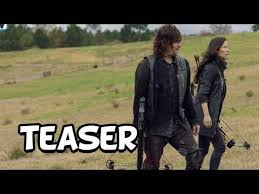 So how DO I think it'll play out on the show?  It's hard to say how we'll arrive at the end game of the "Heads on Pikes" moment.  But in terms of WHO'S head will be on a pike, my thoughts is that it'll be a general mixed bag of nuts, with some deaths being more significant than others, but all deaths being significant enough to mobilize someone ELSE into action.  Here's what I'm thinking: 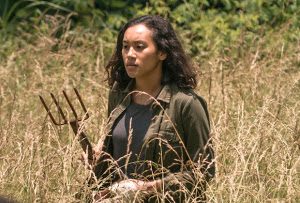 So those are my thoughts.  There are many people that predict that Father Gabriel or even Eugene could be potential victims with their heads on pikes.  I disagree because I believe that Father Gabriel will feel emboldened enough to take up the fight against Alpha, which might lead him to receive his grisly comic book death dealt by Beta.  It's such an iconic death in the comic, I have to imagine that SOMEONE on the show will experience that.  Also, when it comes to Eugene, while I can't see him necessarily FIGHTING, I believe that his significance will tie into that ham radio that he and Rosita were setting up antennae for.

Which leads me to my BIG prediction for the season finale:  I believe that because Eugene set up that antennae with Rosita on the water tower, he will ultimately make radio contact with none other than the Great Rick Grimes.  I firmly believe that before the season finale is over, in the last few minutes, we will make contact with Rick Grimes and we will be left to wonder for 6 months WHERE Rick is (*cough* Commonwealth *cough*) and WHAT will happen now.  It would make for an amazing finale and a nice cap to a pretty awesome season for the show.

But this show has proven time and time again to expect the unexpected so we'll have to all tune in on Sunday to see who's left standing, after the dust all settles.