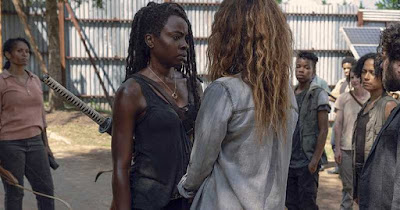 After last week’s climatic episode five of The Walking Dead, Rick Grimes’ highly anticipated “final” episode, the season could’ve potentially ended right there (or at least have served as the mid-season finale).  But in fact, we are only a quarter of the way through season 9, with still three more episodes left until the mid-season break.  The sixth episode entitled “Who are you Now” deals with the aftermath of life AFTER Rick Grimes (six years into the future to be exact).  There are many developments, but also many more questions that hopefully will start to be answered as we continue to go through the season.

This episode very closely follows Michonne mostly, and we get the impression that this episode will largely center on her in this new time period, particularly as we start to see that she spends ample time speaking to Rick at the destroyed bridge where she assumes he died as well as in her bedroom (although it’s not abundantly clear if she’s talking to Rick and/or Carl).  Michonne is incredibly skeptical of the new visitors that have been brought back to Alexandria by Rosita, Eugene and Aaron, led primarily by Judith.  She immediately pats down Magna (the assumed leader) and seems to express how letting new people in the gates of Alexandria is against all protocol (with Michonne seemingly to be the assumed leader of Alexandria).  Judith however, defends her position and they decide that whatever decision needs to be made will need to be presented to the council and voted on, in an apparent democratic fashion (good on Michonne, former lawyer that she is). 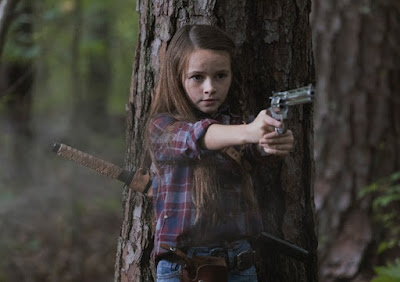 At this council meeting, each people of the new group (with the exception of Yumiko who is being tended to at the infirmary) has to essentially introduce themselves and explain who they were then and who they are now, in this post-apocalyptic world.  We learn that this new group of survivors is a lot like our veterans were way back when: A tight knit motley crew of survivors, willing to do whatever it takes to survive.  It seems that most of the members of Alexandria who attend this Town Hall (a record number due to the fact that apparently they have not had any newcomers in a significant amount of time) as well as the council are moved by the stories from these survivors, particularly by Luke.  Everyone that is…except Michonne.  She is incredibly skeptical and confronts Magna, exposing one of her tattoos as being a prison tattoo (perhaps from her time in the legal system) and justifying why the group cannot be trusted.  She also goes on to mention how they’ve gone through this before and questions if they want to go through all “that” again.

Hmmmm.  It’s starting to become more and more clear that SOMETHING significant happened in the six years that have gone by that has hardened Michonne from helping others, beyond Rick’s assumed death.  What that is however, is still a question by the end of the episode (although this podcaster/blogger has her theories).

In any case, Magna’s crew criticizes her for her defiance in the face of Michonne and potentially screwing up their chances at a life at Alexandria.  No matter, Magna feels that this fancy society can’t be totally trusted and she needs to maintain some sort of defense in case she needs to protect herself (reminiscent of Rick Grimes and crew when they FIRST arrived at Alexandria and met Deana).  She takes it a step further by coming to Michonne’s door (how fancy is Michonne’s home by the way? Construction in the apocalypse is pretty on point), in apparent potential attempt to take her down (possibly kill her).  That is until, she sees a small young child, a male, run into a happy Michonne’s arms.  Michonne and Rick’s son, RJ.

OH MY GOD.  That was like a punch in the stomach.  Talk about ALL the feels.  ALL OF THE FEELS.

We also get a heart to heart with Judith, who reminds her of what her father and her brother would’ve wanted her to do (which is probably not turning people away).  While Michonne is skeptical of Judith (as she is, you know, a child), it appears to make an impression as well as Magna knocking on her door and instead, handing over her last remaining weapon.  This all leads Michonne to change her mind and decide that they will be taken to the Hilltop where the woman leader there (likely an older Enid, in Maggie’s absence) will be able to take them in. 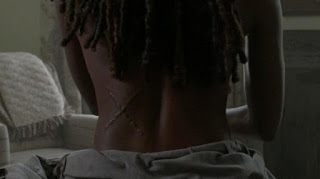 Before all this though, we have a moment where we see that Michonne has a perfect “X” carved into the left hand side of her back.  Too perfect to be a wound, so it must be an intentional branding sort of mark…but why?  And who inflicted that on her?  We are getting more and more clues that something nefarious occurred in the past six years that has led to a very on-guard Michonne.  Also, Judith apparently is having daily conversations with a MUCH rejuvenated Negan, still in his cell, but now groomed and with a renewed light in his eyes.  Also a result of what occurred during this six year time jump? 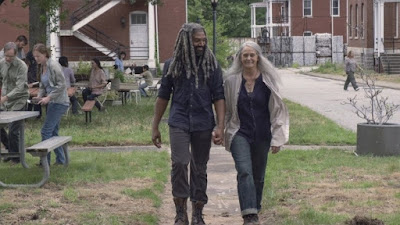 At the same time, we see that Carol and Ezekiel are the official King and Queen of the Kingdom.  They are happy in their kingdom with their (pseudo) adopted teenage son Henry but the kingdom is very much falling apart.  Henry pleads that he’s old enough to get an apprenticeship with the blacksmith at the Hilltop and he could use those skills to better assist the Kingdom with the current infrastructure needs.  Eventually, Ezekiel and Carol concede and allow it with Ezekiel mentioning that perhaps that they should even develop a sort of Fair to bring ALL the communities together.

HUH.  NOW.  If you’re a comic book reader, at the mention of the word “Fair” your hair likely stood up, at the knowledge of what HAPPENS at said fair.  But we’re not going to get into that right now…

In any case, Carol decides to essentially chauffeur Henry to the Hilltop but they are sidetracked with they cross paths with (believe it or not) Saviors that apparently survived since the skirmish at the tent camp, led by Jed and Regina primarily.  Since the Sanctuary went bust (hmmm) they have been living off what they can scavenge and they are looking to take their goods but Jed assures them that he’s allowing them to keep their cart and horses and their lives (what a guy).  Unfortunately, this does not fly with Henry and he tangles with Jed, still using his Akido stick moves, but is quickly overpowered.  Carol, knowing they are outnumbered, backs down immediately, protecting Henry and even gives up her wedding ring which Jed wants, for no other reason other than to be a douche. 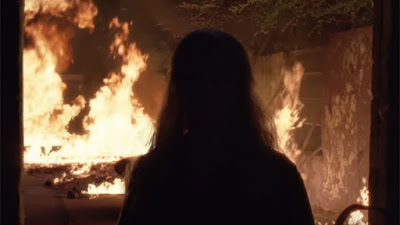 This comes back to back him in the you-know-what however because as Henry sleeps in their tent setup for the night, unbeknownst to him, Carol approaches the Saviors' tent camp set up and confronts Jed.  She tells him how while she could forgive stealing her ring, he stole from her people (hmmm) and he hurt her son and for that he needs to pay.  He swears that he never took anything (again, are we talking about something that happened in the past?) and that she’ll never see him again.  She says that she knows…and drops a match on a gas soaked camp site and burns all the Saviors alive, as she calmly walks away.

SAVAGE.  And my hero.

The next day, Carol and Henry continue on their journey and Henry notices Carol has her ring back.  He doesn’t need to ask what happened.  Carol leads the horses off the map on a detour and we soon see why…she has led them right to Daryl’s apparent new home. 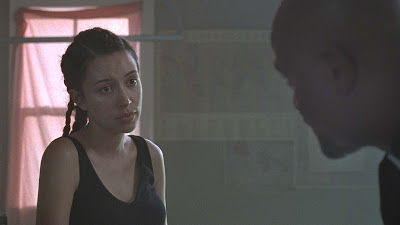 Our last story is concerning Rosita, Eugene and Father Gabriel.  Father Gabriel is showing Rosita in a sort of home office, if you will, maps of the area and a HAM RADIO (comic book readers, this should also set off alarms in her head).  That seems to be the same ham radio that he came across in the home that he inhabited with the former Savior Doctor who administered antibiotics to him that saved part of his vision.  He’s explaining to Rosita that if they could place one of the mechanisms in a certain area beyond their self-inflicted boundaries (or boundaries enforced by Michonne at least), that they might be able to pick up a signal and see who else may be out there.  Rosita agrees that she and Eugene can handle it…and gives him a romantic kiss before heading off.

WTF.  So Father Gabriel is a player?  When in the world is Daryl ever going to get some? 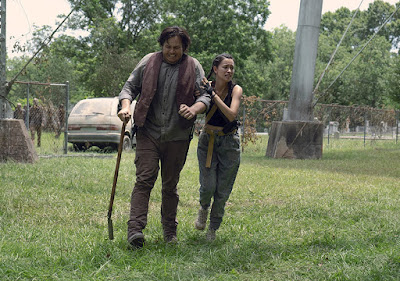 Anyway, Rosita and Eugene venture out (as Eugene tries to make the subtle moves on Rosita…sad) but things start to go downhill very quickly.  Eugene, while at the top of a Water Tank (again, red flag comic book readers) in an attempt to secure the equipment, notices a horde of walkers heading their way.  He runs down the ladder and injures himself, spooking the horses (these freaking horses) and they both have to make a run for it.  What this leads to is the much hyped about scene from the original Comic Con trailer where we see Eugene and Rosita covered in mud, hiding in a ditch, all the while hearing the walker herd walk by, u
ttering an ominous “Whhheeeeereee arreeeee theeeeyyyy?”.

So are the herds evolving?  Will both Eugene and Rosita make it back to tell the tale?  And what happened in those six years that has hardened Michonne but has rejuvenated Negan?  And what has Daryl been up to all these years?

We have only two more episodes to hopefully get closer to some answers.