[RECAP] Season 9, Episode 4 of The Walking Dead, "The Obliged" 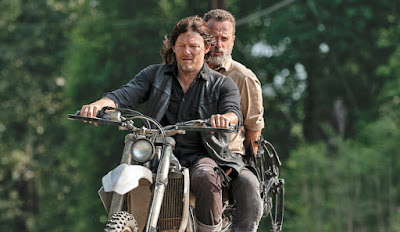 Episode 4 of the "The Walking Dead" entitled "The Obliged" centers around the various obligations that many of our character's are begrudgingly going along with, even when they aren't necessarily fully convinced themselves.  We also see what happens when vigilante justice mentality takes full reign and...the beginning of the end of Rick Grimes???  Where to start??  I suppose from the beginning...

We get to see before the credits even roll, an opening sequence of a day in the life of Michonne.  We get to see that during the day, Michonne is fulfilling her daily obligations of working on a new government charter (remember, Michonne WAS a lawyer in her previous life), taking care of toddler Judith as well as general governing of Alexandria.  This includes tending to the sick, breaking up petty squabbles and the like.  But at night, we see a restless Michonne unable to sleep.  It's at this point that she grabs her katana, goes outside (all unbeknownst to Rick) and unleashes her warrior self toward walkers that she purposely attracts.  We've seen this from Michonne before when they FIRST arrived at Alexandria and she still felt the need to keep her fighting skills sharp (no pun intended) by battling walkers at night, behind everyone's back. 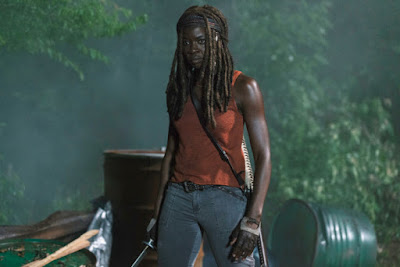 In any case we see that this has become a (seemingly) daily habit, culminating in one evening when she is momentarily distracted by a walker hung from a tree.  The walker seems relatively fresh and his hands are bound which leads me to wonder WHO hung this person from the tree BEFORE they turned into a walker?  Clearly this was no accident.  Michonne seems to be thinking the same thing and as a result, a walker sneaks up on her and the katana falls to the ground, as she battles against the walker, she grabs the nearest thing to her which just HAPPENS to be a baseball bat.  The visual of the bloody bat seems to bring back horrific memories (ie, Negan) and she immediately drops it on site and runs.

Now.  My question is: Was THAT Lucille?  Or was that another random bat that was left behind?  Something to think about.

Back at the Hilltop, Maggie's informed that she's received another letter from Georgie.  She quickly disregards and says that she'll read it later.  She leaves baby Hershel with help and asks Jesus to watch over the community while she goes attend to some business (after she packs a crowbar in her knapsack).  Jesus is no fool and knows EXACTLY where Maggie is headed and what her intentions are but as much as he pleads with her, Maggie's mind is set and she's off.  Jesus then alerts the Calvary essentially, which results in Jerry contacting Rick to let him know that Maggie's on her way.  And that's ALL that has to be said to understand what that means.  Rick immediately radioed one the posts, stating that she is not allowed entry without permission and escorting.  Unfortunately, that all falls on deaf ears since the post is manned by a member of Oceanside/a Maggie Sympathizer.  She ignores his warning and goes back to her magazine (can you imagine reading an old magazine during the apocalypse?  Talk about nostalgia).  Daryl then of all people (red flag) offers to give Rick a ride to Alexandria, which Rick of course takes him up on.  In the meantime, the river is rising and the bridge will likely not hold for much longer, especially in light of the incoming walker herds, according to Eugene.

Back at Alexandria however, Michonne is forced to have some one on one time with Negan.  She's informed by one of the members of the community that Negan is on a hunger strike and is not eating.  She visits his cell to ensure that he eats but what ends up happening is a discussion between these two warriors.  Negan correctly identifies that Michonne IS a warrior and that this domestic goddess role is not who she truly is.  They also confide in each other about their past: Negan's wife passing away from cancer without them ever being able to have a child of their own, something he always wanted.  Michonne's own son Andre passing away when the Apocalypse hit, simply "not making it".  This is company that Negan DEEPLY relishes, since he is basically relegated to solitary confinement (poor guy...yes, I am a Negan apologist).  Eventually though, he hits a raw nerve with her, stating that it was probably for the best that his wife and her son passed away because they would've held them back from being strong.  At this comment, Michonne bristles and storms out...only to eventually return and resume her conversations with Negan.  She ensures him that she is not like him and she doesn't relish fighting but she wants to make the world better for her daughter (IE, Judith).  He then begins to question her on the whereabouts of his Lucille, to which Michonne replies that she likely is still out there but she's not clear on her whereabouts.  This sends Negan into a frenzy, wailing about wanting to be reunited with his "Lucille" (more likely his wife, then the bat itself).  He then begins beating his head against the wall, in a sort of attempt to knock himself out, perhaps sadly even kill himself and put himself out of his own torture. 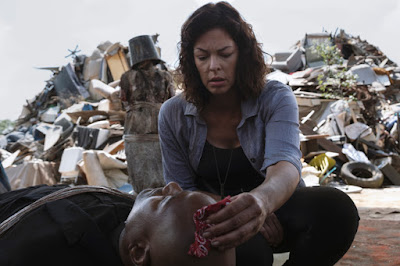 Meanwhile, we return to the junkyard where we see that Father Gabriel has been tied to a gurney, much like Negan was when he was held by Jadis at the junkyard.  He comes to and sees that Jadis is about to unleash a walker on Gabriel to finish him off and kill him.  He then puts his heart on his sleeve and pleads with Jadis, appealing to her better judgement, while also coming to terms with what is about to happen.  Jadis ends up tearfully changing her mind...but drugs Gabriel with some sort of chlorophyll cloth, effectively knocking him out.  Yet again.  When he comes to, he finds a note simply stating: 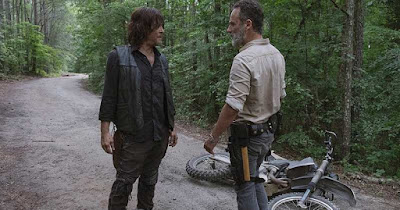 Finally, Daryl and Rick are (supposedly) en route to Alexandria, until Rick finally realizes that this is not the route to Alexandria.  Long overdue, the two men hop off the bike and confront each other.  It's made abundantly clear that Daryl is trying to prevent Rick from getting to Alexandria and stopping Maggie and that the post is also in firm agreement with them.  Push comes to shove (literally) and the two men come to blows, eventually landing in a sort of sinkhole.  During this time in the hole, the two men hash out their conflicting positions.  Daryl states emphatically that he would've died for Carl or for Rick, but Rick's mission to "save" everyone including Negan isn't doing any justice to Carl's memory and is actually sullying the memory of Glenn, Abraham and Sasha.  As much as Rick protests against Daryl's points, Daryl insists that he just needs to "Let it Go".  This heartfelt conversation is cut short due to the sound of gunshots coming back from the camp.  Unbeknownst to them, a faction of the Saviors have come to incite their revenge on Carol and her crew, which breaks out into gunfire.  This gunfire in turn, attracts the walker herds that Eugene has been warning them all about for some time.  As  result, these walkers start stumbling into the sinkhole, ramping up the sense of urgency to get out of there.  Rick uses a tree root to help leverage him out of the hole and Daryl then uses some of the walkers he's able to kill as building blocks to climb higher but it's still not quite enough.  Rick leverages a nearby wiry branch to hold on to and asks Daryl, his pseudo-brother, to take his hand, to essentially trust him.  Daryl luckily does and he is pulled into safety.  They then take out a few walkers before realizing that the massive herds are coming and they need to divert them as well as warn the others.  Rick mounts his white horse (subliminal messaging much?) and informs Daryl that he'll work on diverting the herd and that he needs to go back and warn the others.  Against all of Daryl's warnings, he chooses to lead the herd away from the bridge to, well, someplace else. 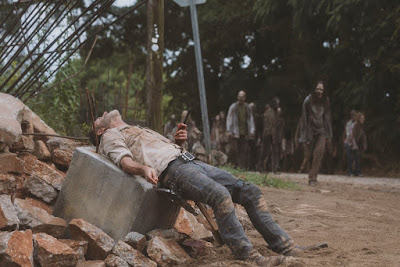 Unfortunately, Rick's plan falls apart when his horse is spooked by the trailing walkers, causing Rick to fall off and land on some concrete, in the process impaling him on a piece of rebar.  UGH.  To say that scene was uncomfortable to watch would be an understatement.

So that's where we leave off.  Rick lying impaled on the floor, as the two massive herds slowly shuffle closer and closer.  This.  Does.  Not.  Look.  Good.