[RECAP] Season 9, Episode 2 of The Walking Dead, "The Bridge" 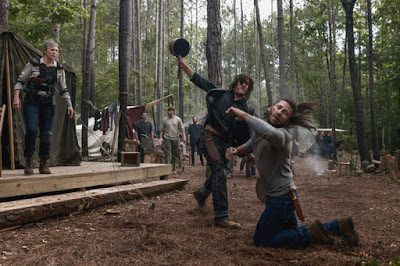 The second episode of Season 9 of The Walking Dead is all about bridges...literally, figuratively, in every which way.  Hence the title "The Bridge" which continues to ask the question: Can people truly come together?  Or will there always be conflict?  At least between Saviors & Non-Saviors?  Can a bridge between these once warring parties ever truly be created?

We start off the episode with a voice over from Rick discussing how they are evolving, building and growing.  We see the fruits of his labor in terms of various members of the community going about their day to day tasks and responsibilities, romantic relationships, all illustrating a sense of normalcy in this dangerous world.  We even see young Henry kiss Carol before running off to his own errands, as she and Ezekiel look on proudly (awww).  We come to realize eventually that this Rick voice over is because this is all being explained to Negan (yes, he's still very much alive, lest you forget) by Rick, as he visits his jail cell.  Rick greatly advocates on how it is in people's nature to come together while it is obvious that Negan greatly disagrees and believes that it is in people's nature to DISAGREE and to engage in conflict.  Rick's annoyance with Negan's disapproval almost gives off the impression that he WANTS to convince Negan of his way, that he CARES what he thinks.  These jail cell conversations will likely continue in the episodes to come (especially you're at all familiar with the comics *ahem*). 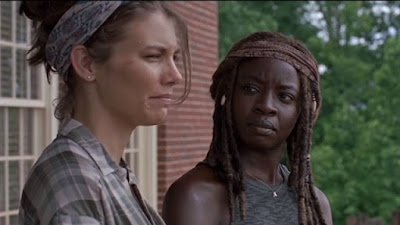 In any case, we see in the episode that Michonne ventures to visit Maggie at The Hilltop, as she is trying to tame and redeem a wild horse (metaphorical, no?), in an attempt to appeal to her kinder inner self and convince her to supply the Saviors with food.  Maggie is quick to point out that she has not received the requested ethanol fuel from their camp but Michonne says that the convoy that was to bring over the supplies has gone missing.

This point comes up again in a conversation between Alden and Rick regarding worker Saviors, therefore we can quickly infer that SOMETHING is going on that these Saviors are being picked off (particularly in light of how the episode ends).  But we'll revisit this topic at the end. 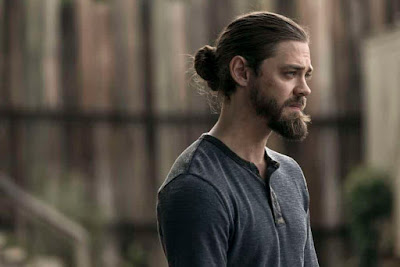 Maggie continues to stand her ground and Michonne begins to question her on what is going on with Earl, the blacksmith.  Turns out that Maggie has him locked up in one of her cells, but because this is a new experience for her, she is not at all sure how long would he be jailed for, what the terms are etc.  Maggie does not want to simply just let Earl go, considering he conspired to kill her, but it is clear Jesus has reservations on her decision.  This is particularly since Earl's wife Tammi implored Jesus to convince Maggie to let her see her husband.  She is incredibly compelling in her distraught in not only losing her son, but now losing her husband in a way, to being jailed.  This interaction certainly seemed to make an impression on Jesus who does try to bring it up to Maggie (in the most gentle way possible of course, considering she did hang a guy, let's not forget).  Maggie is doubtful but it's clear that she values Jesus' opinion and is giving it some thought.

Also, it is worth noting that apparently Georgie (the woman who gave Maggie the handbook "The Key to the Future") has been in regular contact with Maggie on the progress at the communities and has tried to convince Maggie to come and JOIN her.  But, join her...where?  Well, if you're a comic book fan, you likely have an idea where Georgie's from but only time will tell if that's accurate. 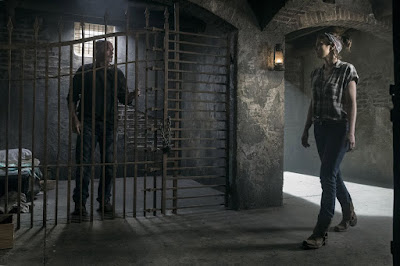 Eventually, we see that Maggie ends relents and allows Tammi to have a tender moment with Earl down in the jail cells (which ironically he helped build).  From their heartfelt conversation, Maggie and the audience learns that Earl had a drinking problem.  Maggie ends up having a one on one conversation with Earl regarding his past and ultimately, this allows her to come to the point to decide to set him free to live and work in the community as he once did...but under supervision (a sort of post apocalyptic probation, if you will).  She also decides to have food sent to the Saviors.  An incredibly grateful Michonne asks why the change of heart and Maggie says that it was primarily because her father (the late, great Hershel) also had a drinking problem but HE was redeemable and contributed to the good of so many.  She still stands by her decision to execute Gregory though because to Maggie, he had plenty of opportunities to change and he squandered them all.  Essentially, he was past any redemption.

The question then becomes, who has the RIGHT to make that call?  On who is redeemable and who isn't?  That's still left to be determined.

On another note, we see a romantic/lustful relationship blossom between Anne/Jadis and Father Gabriel.  Anne seems to have a closer friendship with him than with anyone else and even works on a portrait sketch, based on Gabriel's recollection.  Turns out that this was a sketch of his church organist who he happened to have strong feelings for.  Finally during his night watch, while sitting on a bench, Anne finally makes a sexual move on Gabriel (damn, pretty aggressive Anne), who FULLY reciprocates after he explains that he's Episcopalian, meaning no celibacy for him (damn Gabriel with the smooth words).

What is the MOST interesting however, is what happens AFTER their little stolen moment: As Anne now stands in now as apparently the Watch (holding one of her little wire creatures, I may add), she looks up...and notices the black helicopter flying overhead, causing her eyes to widen as large as saucers.

Clearly this helicopter is always hovering nearby in some sort of regular observation.  But who is manning it?  Georgie's group?  Someone else altogether?  I have a feeling that we'll finally get a firm answer to these questions this season. 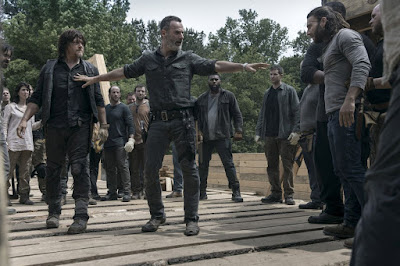 But the focal aspect of this episode all revolves around the bridge, and the repairs needed to be completed in order to unify the areas and also be ready for when a potential roaming hoard eventually comes there way.  We see that both Saviors and Non-Saviors are working on the bridge but the tensions are very high between both sides.  Things come to a head when Justin (one of the Saviors) decides to push young Henry aside in order to gulp up more water than he should, since one cup is being rationed to each person.  Henry decides to take it upon himself to knock Justin down with his stick, something that he does not take lightly.  As he goes to attack Henry, Daryl stops him which becomes an all out brawl between the two men, only to be broken up by Rick.  In a tent scene very reminiscent of a scene out of M*A*S*H (actually, all of the tent episodes felt like scenes from M*A*S*H), Daryl very clearly expresses how he feels that The Saviors are all past redemption. 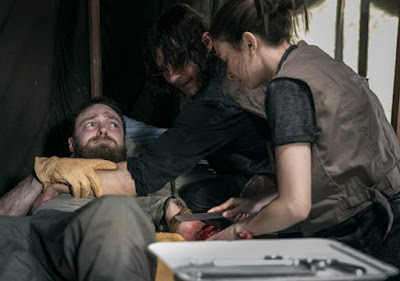 This ends up coming up again when The Saviors go AWOL during a log endeavor that ends up being ambushed by a hoard of walkers.  Justin, the Savior that was supposed to be on call and let the workers know that they were coming, wasn't able to for reasons that he said were beyond him.  The result of this is a horrific accident where a log falls on Aaron's arm and essentially crushes it, only be saved by Daryl who rushes him to the infirmary while the rest of the camp fights off the walkers and diffuses the situation.  Aaron's arm unfortunately is beyond repair though and Enid, the new defacto nurse, has to end up making the executive decision that in order to save Aaron's arm, his arm will need to be amputated...and in a gruesome and cringe worthy scene, that is exactly what happens.

A delirious with anger Daryl enters the tent to confront a non-remorseful Justin who's excuses fall on deaf ears.  Daryl attacks Justin with all the pent up anger in his being, only pulling back because he's forced to.  Eventually we see in the evening time, after dark, that when Justin once again mouths off at this time Rick, he pushes his luck to the point of no return and Rick banishes him back to The Sanctuary.  Justin doesn't bother to wait until morning and opts to head back right then and there...only he never makes it since he apparently sees someone he recognizes and we as the viewer then see that he appears to be knocked out by this said person.

So who this person that is apparently picking off Saviors left and right?  And who's way is right and who's way is wrong?  How can a "more perfect union" be achieved after a war?  And how do we govern moving forward?  It seems that this will continue to be a focus at least in the front half of the season.  The war's over...now what?  That was the easy part but what comes next?  Well, that's decidedly more complicated.