With The Walking Dead season 8 now in the books, one might ask, what are we to do now?  Well, AMC's very own FEAR The Walking Dead has been increasingly gaining a following as well as positive critical reviews.  It appears that the redheaded stepchild of The Walking Dead has finally come into its own.  So much so, that this co-podcaster that had never seen ONE EPISODE of FEAR decided that with the Morgan crossover (and the prospect of a larger crossover down the line), it was time to jump on the bandwagon and assess the show for myself.

NOTE: Now please bear in mind that I did NOT do a blitz of seasons 1 through 3, but rather read a 50 page "Cliff Notes" online version of the previous seasons, in the interest of time (#momlife #corporatelife).  All in all, I think it did a pretty good job of getting me up to date so thanks IGN! 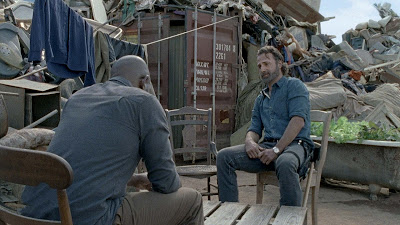 The first episode of the season was in every sense a transition episode.  This is made explicitly clear by the fact that our main characters do not even make an appearance until the last few minutes of the episode.  Instead, we start off the episode with what appears to be a cowboy sitting at a campfire.  Upon hearing some rustling in the woods, he starts talking to who may be there but, in essence, is really talking to himself.  Eventually Morgan emerges, after having killed the walker that was the lurking threat.  We then get a flashback that takes us to Morgan right after the war with the Saviors (pretty much where Season 8 of TWD ends).  He had settled into solitary living at the junkyard when he is approached by several members of TWD (Jesus, Carol and finally Rick), in an attempt to convince him to rejoin their community and society in general.  Rick even makes the plea that "You can hide, but you can't run".  A statement to express as much as Morgan may want to escape organized society and relationships, he cannot avoid it because whether he likes it or not, society will find HIM.

This seems to resonate with Morgan and he decides to try to run away as far as possible from Alexandria and Virginia in general.  After a mixture of walking, running and driving, he eventually arrives in Texas and crosses paths with John Dorie (the cowboy).  John wants to know Morgan's story but Morgan resists this at every turn.  They eventually both come across a camp with trailers with numbered flags (after Morgan tries to ditch a lovable John Dorie who's only trying to be his friend), where they are held up at gunpoint...and saved just in time by another stranger named Althea (or Al).

Side note, for those out there who may play Overwatch (DISCLAIMER: Not me, my husband), Althea bears a striking resemblance to the character Tracer.  Am I right??) 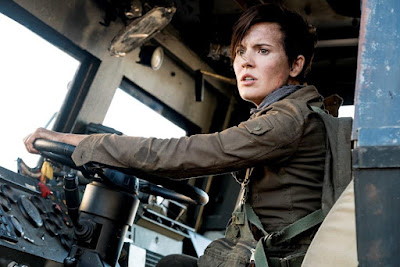 In any case, Althea helps John Dorie and Morgan just in the nick of time (with a pretty awesome SWAT car by the way that looks like a cross between a SWAT car and the Batmobile from The Dark Knight) and we find out that she used to be a journalist.  It seems however that once a journalist, always a journalist, though, because Althea is absolutely hell bent on getting the story of a survivor she comes across.  We learn through John Dorie's videotaped interview with Althea that he is looking for his love named Laura and he is certain that he will find her.  Morgan seems to resist and resist at every turn until he finally succumbs to Althea's persuasion and gives her his "story".  Or as much of his story that he's comfortable sharing.  He shares information about Atlanta, Virginia, The Kingdom and Shiva (of all things to bring up).  But the essence of his story and his mantra that he states before he leaves them to travel on his own (even though he sustained a bullet wound injury in his thigh) is the sad statement "I lose people and then I lose myself".

With this heartbreaking declaration, Morgan attempts to venture the road alone, trying to catch up to a walker, in an attempt to confirm if it was the same individual he saw injured in a car earlier, who insisted on being left alone (it was).  Before he can become eventually overcome by walkers, John Dorie appears in the background and literally has his back.  After burying the walker himself, Morgan finally agrees to travel with John Dorie and Althea, temporarily only, of course.

As they continue to drive, however, they see what appears to be an injured woman in the road.  They opt to stop and see what they can do to help her but the tables quickly turn as the injured woman ISN'T injured but is actually Alicia, acting as a decoy.  Once she has them where she needs them, we see Nick, Strand, and Luciana all emerge with weapons, holding Morgan, Althea and John Dorie capture.

We end with Althea asking them, what's THEIR story?

With Madison glaringly missing from the group, what's their story is very much the question of the hour.