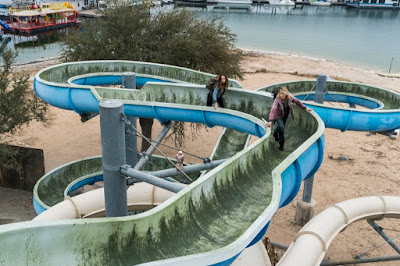 Coming off last week's highly emotional episode ending in the death of Nick, I honestly was not sure what exactly to expect from episode 4, "Buried".  What we get to see in this week's episode, however, is less of a focus on the aftermath of the death Nick, but rather more of an opportunity to learn more about the events leading up to...whatever happened at the stadium.

The episode continues from where we left off with the death of Nick.  We see the opening scenes from the vantage point of Althea's video camera, documenting Luciana stabbing him before he turns and Alicia taking out the Walker version of the vulture Nick killed inside.  Strand covers Nick's body with a dark cloak and next we see that they are all back in the SWAT vehicle, driving off somewhere, with the body of Nick in tow.  As John Dorie drives, Althea continues to document the individual stories of Strand, Alicia and Luciana, more specifically what transpired the day that each of them went out individual runs, a day when apparently decisions were made that brought them to where they are now.

Through flashbacks, we see that the rations at the stadium had run dangerously low with the survivors down to consuming cat food, the last scraps of what was available.  The vultures have been pillaging the area dry and what's worse, flaunting their newly found food and goods right outside their gates.  Since they are left with little options, we see that on that fateful day, three pairs went out on runs: Strand & a gentleman from the stadium; Alicia & Naomi; and finally Luciana and Nick (as suspected, we will continue to see Nick via flashbacks). 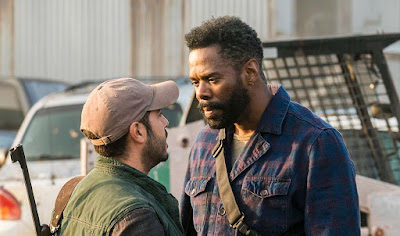 Strand and his companion drive on the search for supplies and during their ride they have some brief conversation involving Strand purposely avoiding him (for reasons Strand says are justified...feelings perhaps?) as well as a rock that Strand carries around and as a reminder of the man he once was.  Based on what occurred in Season 3, I suspect that this is a remnant piece of rock from the dam that was blown up in the season finale but that's obviously just speculation.  In any case, they eventually come across a greenhouse that they review for potential goods, but are attacked by cactus spiked walkers (pretty cool walker moment although not the coolest of the episode).  Strand manages to take them down and save his companion and before they leave, he shows him a car that apparently he had been stockpiling supplies.  He informs his companion that these goods wouldn't last a day at the stadium, but they could help two people survive for some time.  The man refuses to abandon Madison and everyone at the stadium and they decide to part ways, leaving Strand to drive off by himself with his goods to ponder his decision. 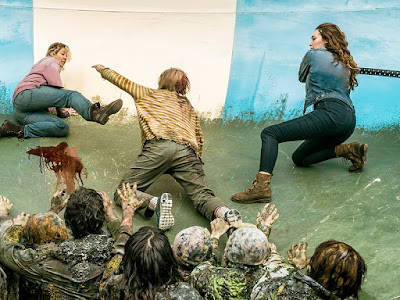 At the same time,  we see that Alicia and Naomi went on their own run that brought them to an abandoned water park.  Upon their arrival, the observe numerous cars and evidence that a community once existed here before being potentially overrun by walkers.  They notice that at the very top of one of the elaborate water slides, there appears to be some sort of make shift housing that could have some useful items so they decide to make their way up there.  Unfortunately, due to the stairs being blocked off, they end up having to tip toe around the perimeter of the pool, ultimately killing some pool walkers that come dangerously close to them, and finally making their way to the top via the slide.  Once up there, they see that it truly was a sort of fort with a high enough vantage point that a machine gun was set up.  Unfortunately, at this point they are confronted by two walkers that take them off guard and cause them to slide DOWN the water slide into a sort of drain/cesspool of walkers.  Luckily Alicia managed to grab the shaft of the machine gun on her way down the slide and uses this as a weapon to defeat the most threatening walker in the drain (we find out that she later sharpens this shaft into a much more potent weapon).  They return to the fort and find a nearby crate containing a vast amount of medical supplies that they begin to pack up to bring back to the stadium.  We see however that Naomi has also found a set of car keys and she takes the opportunity to distract Alicia and make her escape back to the cars in the parking lot (that was pretty slick right?).

Once downstairs, she manages to find the car that works with the set of keys she found (what a stroke of luck) and while she tries to escape, she manages to barely move a few feet due to a lack of gas.  Alicia then approaches her window and Naomi explains how she feels that the stadium is doomed to fall but eventually succumbs to Alicia's persuasion and returns with her. 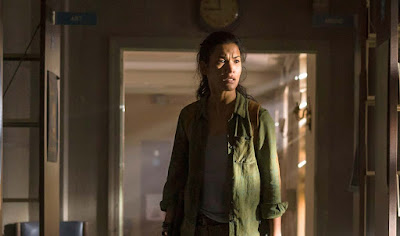 Finally, we see that Nick and Luciana traveled to an old public library, looking for anything that could prove to be useful.  Luciana is doubtful that there's anything for them there and even back at the stadium, as she passionately tries to convince Nick to run away with her to a new place where they can start over again.    They eventually come across an atlas specifically for the South West area of the United States and they say that whatever page they open to is where they will go.  We never get to actually see what that page is or what area it is that they decide to go to.

What we DO find out is that all three of these runs ended up all the groups deciding to return to the stadium, despite their doubts and itchiness to flee.  All the individuals return with a renewed sense of hope: Strand thinking he is now a better man, returning with his goods, rather than just thinking of self preservation; Naomi and Alicia returning with the medical supplies and setting up an infirmary (with Naomi's ominous warning of what is likely to come); Luciana and Nick returning with the atlas and a plan on heading farther off to collect the proper key items needed to regrow crops at the stadium.  All of this hope is cut by the present day where all these individuals tearfully state that they should have never gone on those runs that day and that their actions indirectly led to Nick's death. 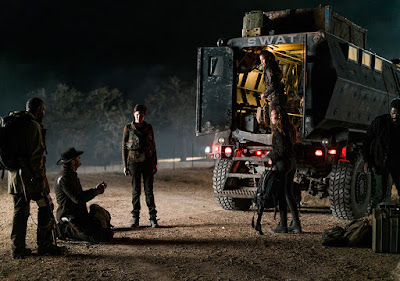 The SWAT car finally arrives at its destination where we find out it's less about Nick's burial site and more about another secret stockpile location of weapons and a note that leads to where the Vultures can apparently be found.  Althea feels deceived but they inform her that if she wants to know the whole story, she should drive them to their final destination and come see for herself.  She begrudgingly agrees and after burying Nick (because they do bury him under a tree at this site), they begin to load up this weapons arsenal in the SWAT vehicle.  It's at this point that John Dorie notices that one of the bags was very familiar and in this bag we end up seeing a distinctive revolver of his, with even his initials on it.  Through a flashback, we realize that his "Laura" was actually Naomi.  He urgently wants to know where she is but Alicia and Luciana inform him that she didn't make it out of the stadium.  He cannot quite come to terms with the idea that she is dead and refuses to continue on with them, instead asking him to leave him be.  Morgan opts to stay with John Dorie, providing him with companionship as he processes this new information.

And that's where we leave.  We do get to see a few flashbacks with Madison speaking to the Vultures, standing her ground and them continuing to just wait in the wings for the right opportunity as well as her speaking to all the individuals when they come back from their runs.  Again, the looming question is what happened to Madison and while we still don't know yet, it appears that we are inching closer to some answers.