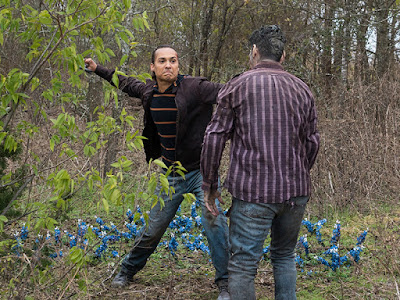 The third episode of this season entitled “All Good Here” continues to play with time and give us further insight into the motivation of our main characters in their current state of mind.  We focus primarily on Morgan & Nick (in the NOW) and Nick & Madison (in the BEFORE)…and we are also provided with a shocking twist by the end of the episode.

As has been the trend with the previous two episodes, episode three picks up exactly where episode two leaves off, following our characters in Althea’s SWAT car.  They are on their way to the town they just came from, in order to allow our main FTWD characters the opportunity to evaluate what occurred there and to see if it could, in any way, be connected to whatever occurred at the stadium (something we are still not fully clear on).  While in the car, Althea continues to push to understand what their “story” is; That is, how did they get to this point?  After some banter and swiftness, Althea manages to get the best of Nick and holds him at knife-point.  Nick instructs Luciana to keep driving and eventually they struggle, causing the car to swerve off the side of the road and finally crashing into a ditch.  All of members of the car survive, but with some injuries, including Nick who sustained yet ANOTHER head injury (what is it with the head injuries, right?).  Before he passes out from said injury, he sees that the door to the back of the truck has been blown open and walkers are starting to descend on their vehicle. 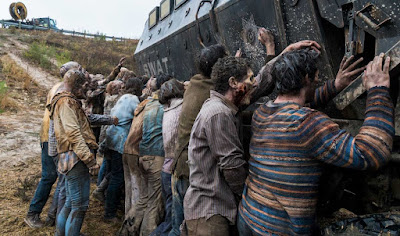 When he finally comes to again, he awakens to see that the tide has shifted and now it’s HIS group that are all imprisoned and zip-tied by Althea and her crew.  Unfortunately for them, Althea’s SWAT car is stuck and spinning its wheels to no avail.  Luciana mentions how she noticed in a town further back that there was a truck with the equipment they could potentially utilize to help pull her car out.  With that information, Althea decides to show a sign of “good faith” and unties Luciana, Strand and Alicia.  BUT, Nick remains tied up and under Morgan’s supervision while they go and get the truck.  Morgan, already suffering from a gunshot wound to the leg, willingly offers to stay and play babysitter (what other option does he have really?).  It’s decided and the rest of them go.

It’s during this time that we get more insights into the events leading up to where Nick and his group currently find themselves.  All of this happens through flashbacks, as we cut back and forth between the present and the past, the past involving specifically Madison.  We see that after the Vultures came to the stadium, the situation there continued to deteriorate and became more and more dire, in regards to specifically supplies and food.  Madison decides that she needs to do a run and Nick insists on coming with her so she relents and lets him tag along.  Upon leaving the stadium, Mel comes up to their car and tells Madison that the area has very slim pickings, in case she wanted to know.  Madison thanks them for their information but still forges on, even when Mel throws back in their car the issue of “The Little Prince”, left for Charlie to review and read.  According to him, Charlie doesn’t like children’s book.  After this confrontation, Nick asks Madison, how she can come out here scavenging, with everything going on.  Madison calmly replies that every time she leaves the stadium, she tries to find something good; Something or anything that reminds her that the human race was once good.  It could be flowers, it could be a book, anything at all. 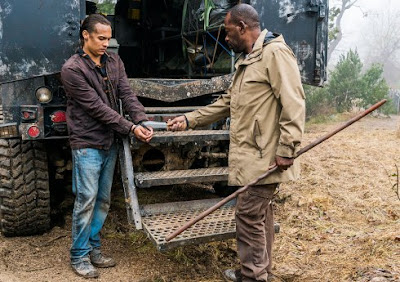 In the present day, Nick tells Morgan that he is hungry and, much to his surprise, Morgan does not hesitate to release him from his zip ties.  Nick is amazed that Morgan would do this and proceeds to test Morgan’s capabilities…and is quickly shut down.  Morgan swiftly gets him on his stomach, all with the fluid use of his trusty stick, injured leg be damned.  At this point, Morgan has earned Nick’s respect and goes as far as to formally introduce himself and share with him half of what appears to be a peanut butter protein bar.  For fans of the Walking Dead universe, this point was a little nod to the classic episode “Clear” where Rick, Carl & Michonne stumble upon a delirious Morgan, killing anything that crosses his path.  It’s in this episode that Michonne pockets one of Morgan’s protein bars so it’s nice to see this subtle callback to another time.

In any case, Morgan advises Nick to not wander off, as he’s going to walk up to the road to investigate the conditions and apparently do some Aikido as well, testing his leg.  While he is doing this, we see that Nick has found Althea’s camera and tapes in the truck and begins to view some of her interviews, in particular the most recent ones of John Dorie and Morgan.  Eventually, Morgan runs back to Nick after seeing a mysterious vehicle zooming down the road.  He warns him to get down and hide but when Nick sees what vehicle Morgan is referring to, it lights a fire in him that has not been seen.  He practically claws Morgan’s eyes out, in order to make it past him and chase the car down.  He obviously does not catch up to this car and he finds himself in quite the predicament, surrounded by walkers.  Fortunately for him, Morgan went after him and saves him just in time. 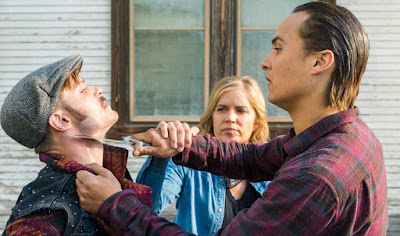 Now in order to better understand Nick’s frame of mind, we have to go back to the BEFORE, when Nick was on a supply run with his mother Madison.  In this flashback, we see that they arrived at a little town but they arrived a tad too late and the Vultures are in the midst of finishing up their ransacking of the property.  This raid seems to be led by Mel’s brother Ennis, who blatantly flaunts all the goods that they were able to pull from this location.  Had they only arrived slightly sooner, all those bounties could have been there’s.  But alas, that is not the case and Ennis goes as far as to insinuate that Nick is not capable of providing for his family as HE is able to.  This pushes Nick over the edge and he lunges at Ennis and goes as far as putting a knife at his throat.  Madison finally breaks his trance and pulls him away, especially upon noticing that Charlie is present, observing everything.  Nick reluctantly relents and pulls away but, not before he draws first blood.
Eventually, Nick and Madison are back on the road and as he’s commiserating on the missed opportunity back at that town, she stops the car abruptly.  They get out and Madison points out a field of Blue Bonnet flowers and they walk within it, taking in all its simple but beautiful splendor.  It’s a prolific moment that we inevitably circle back to. 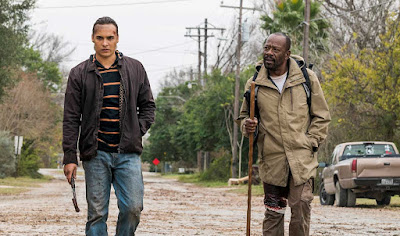 When we rejoin the present however, we are back to the gray skies and doom and gloom of the current day.  Morgan and Nick have walked to some nearby town, with Morgan trying to school Nick on why he should control his temper and how revenge is essentially a hollow victory.  Nick is dismissive of Morgan’s words and Morgan leaves Nick be to handle his revenge mission on his own.  In an attempt to walk off however, Morgan runs right into Ennis, in midst of clearing (no pun intended) goods from inside one of the buildings.  Morgan tries to advise him to leave this area but again, Ennis is dismissive as well of Morgan’s words.

It’s interesting that both of these men did not heed Morgan’s advice and their ultimate outcome might have been able to be avoided, had they done so.  But oh well. 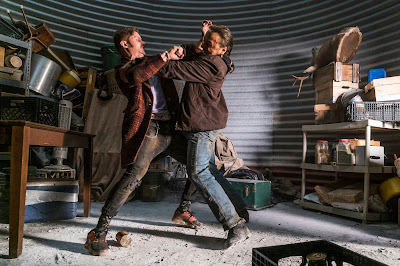 Nick subtly approaches the confrontation in progress between Morgan and Ennis and while Morgan chooses to walk away, Nick is on a mission.  Ignoring all of Morgan’s warnings, Nick immediately confronts Ennis within the confines of the building he was pulling supplies from.  After a back and forth fist fight between the two men, Nick ultimately gets the better of Ennis plunging him into the antlers of an animal bust.  In a level of added cruelty and brutality, he even pushes him further into the antlers, while he is still alive. 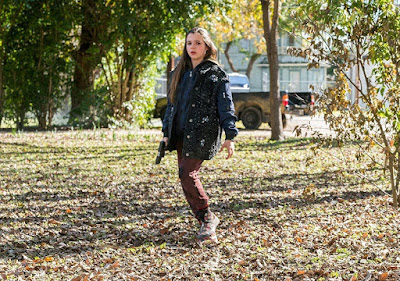 After the savage murder, Nick meets up again with Morgan, confirming that he did exactly what Morgan specifically wanted him to avoid.  Nick then takes a moment to sit and contemplate over what he did and the recent memory with this mother Madison in the field of flowers when we randomly hear a loud bang.  As Nick looks down at his hands, they are covered in blood and he realizes that he has been shot through the stomach.  He looks up stunned, to see Charlie with a handgun, visibly upset.  He utters her name and she runs off, at the same time that the others get back to them, now running feverishly toward a fallen Nick.  They do their best to aid Nick and be positive, but it becomes increasingly clear that his injury is far too grave for him to be able to overcome.  He finally passes away, as his sister Alicia weeps over his body and we are then transported to a surreal image of Nick in the field of flower, alive and in amazement, before the screen goes black. 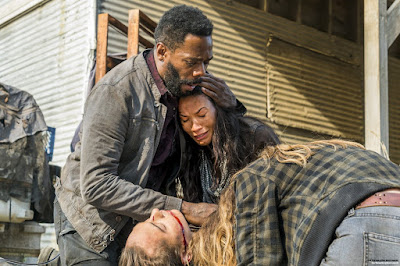 As far as deaths go, even not being a diehard FTWD fan, this was by far one of the most impactful deaths in the Walking Dead universe, both in terms of shock and artistic depiction.  What still remains to be seen however, are the whereabouts of Madison.  Based on Nick’s reaction at the site of Ennis, it leads one to think that they were integrally involved in what occurred to her…but then, what DID happen to her?