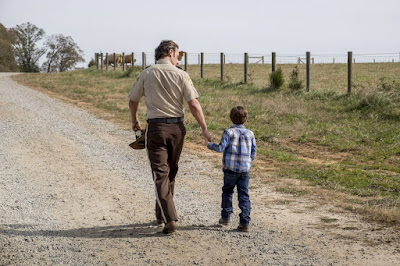 Well, we finally arrived at the Season 8 finale of The Walking Dead.  In reality, it was a clear cut episode that avoided being too winded by keeping the episode at an hour and 15 minutes (which, without commercials probably comes out to a solid hour of content).  That being said, the writers couldn't avoid to waste too much time so we got to the task at hand fairly quickly.


We join Rick as he finally has the courage to speak to Siddiq, as he tries to better understand Carl's mindset in those final moments.  Siddiq explains to Rick what we already know: That Carl was trying to honor Siddiq's mother in his attacking of those walkers.  This thought apparently stays with him and ultimately comes up to the surface at the very end.

Everyone is apparently preparing for the battle on both sides and we see Eugene assuring Negan all the ammunition has been prepared as requested.  Negan goes so far to use the gun offered by Eugene as a test (shooting a scare crow labeled "Rick") and it passes with flying colors.  Negan questions whether Eugene really wants to come with them and witness this slaughter himself but he assures him that he NEEDS to be there.  At that point, we see Negan direct a group of, quite frankly, EMO looking Saviors (color me surprised that even exists) to a certain checkpoint while at the same time directing other Saviors to bring Dwight along for the ride.  Since we last saw Dwight, he has been branded with the scarlet "A" (literally) and is basically getting the same prisoner treatment Daryl received when he was held in the cell. 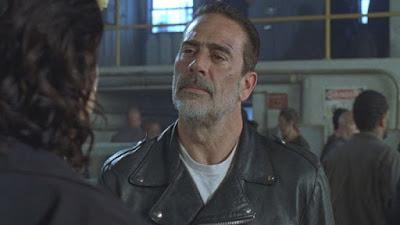 Once everyone is clear on their orders, Negan tells Eugene and Gabriel to ride along with him on their way to this final battle and of course, they oblige.  During that car ride, Negan uses it as another opportunity to have a "confessional" and he informs Eugene and Gabriel that the plan shared with Rick was a fake plan.  He tells them that he's taken things a step further by planting his EMO saviors where he thinks Rick will find them and likely murder them but not before he finds another set of false plans on them.  Rick will assume that these are the correct plans and follow those which will lead them right to where the Saviors will be waiting for them.  Father Gabriel is so disgusted with this plan that he, blind and all, decides that he would rather tuck and roll and jump out of a moving car (which he does).  Once he lands, he tries to navigate himself through the forest with his near blind tunnel vision.  Inevitably of course, he is caught by, of all people, Eugene.  He is livid with Father Gabriel and asks him at gunpoint "Where does your faith go when you truly need it??".  Father Gabriel is completely unaware that Eugene had far bigger plans and that he should've had some faith in his fellow man.  Regardless, Negan eventually finds them and gets them back in the car. 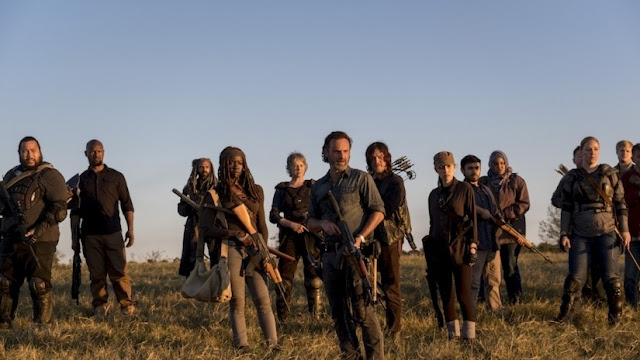 Back with Team Grimes, our group is confidently following their map, assuming its the right course of action.  We see them encounter the EMO saviors we saw earlier and, as Negan anticipated, they made quick work of them.  Morgan murdered one Savior in a particularly savage manner that caused him to have another hallucination in the form of Jared, the Savior that he held down in the bar while he was devoured.  Morgan is clearly on edge, as was evidenced at the start of episode, almost taking out little Henry in another moment of hallucination.  Regardless, they keep moving forward and eventually come to a large, fairly open field (PS: We'll come back to their comment on the large "herd" at the end of the recap).  All of a sudden, we hear the infamous Savior whistle coming from all sorts of directions.  We hear Negan use a bullhorn to tell Rick about how he had a master plan, how Dwight got intercepted, how Eugene helped make this happen and how Gabriel was going to have to be killed off now.

All the Saviors appear on the horizon as a massive force to be reckoned with and the countdown begins to the planned slaughter...except that the slaughter doesn't happen.  At Negan's call, the Saviors open fire, only to have their ammunition backfire and injure and/or kill the shooter, all courtesy of Eugene.  This provides Rick and crew with the opening they need to go with a full attack and start defeating the surviving Saviors.  Even Father Gabriel gets in on the action by punching Negan, followed by a beat down by Dwight (hey, you can't blame the guy for getting his licks in).  Negan does manage to run off though, his hand injured by the faulty ammunition, with Rick in hot pursuit. 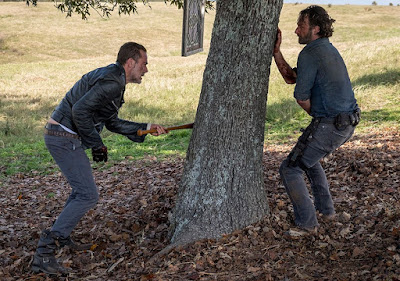 What follows is the "Final Stand" between the two men, by the same tree with the same hanging stained glass elements we've seen in all the "Bleary Eyed Rick" flashes.  Before Rick can do any significant damage to Negan, he is "Lucille-ed" in the side, explaining the bloody injury we noticed in those flashes.  It's at this point that Rick implores Negan to give him 10 seconds to plead his case, on why it doesn't have to end this way.  Negan starts counting down as Rick tearfully requests for peace, even citing about how this is what Carl would've wanted.  It's at this point that time almost stands still and we get a moment where we see not just Rick in tears but Negan as well.  Then, in a moment so fast that you almost miss it, Rick slices Negan's throat, with a shard of stained glass.  Negan drops to his knees, clutching his bleeding neck, uttering the haunting sentences of "Look what you did.  Carl didn't know a damn thing". 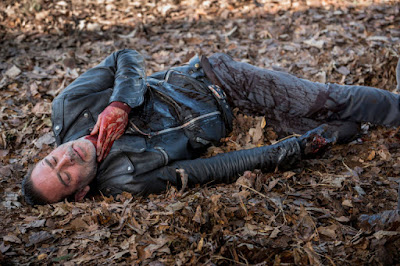 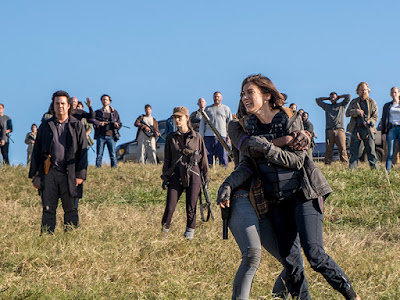 These sentences uttered by Negan before losing consciousness haunts Rick as well, as he turns around and noticed that The Saviors have all surrounded and they, as well as his own people, have been frozen watching the exchange.  Rick breaks free of his trance and then calls to Siddiq to come save Negan.  It's at this point that Maggie almost makes a leap for Rick and/or Negan, only to be held down by Michonne.  She breaks down in tears and screams with anguish on how Negan murdered Glenn and how it's not over until Negan is dead.  This was definitely pretty painful to watch, especially hearing Glenn's name mentioned again after so long (let's not forget, Glenn was killed almost 2 seasons ago).  Rick stands by his decision though that this is all part of a NEW way of moving forward, a way that involves living together and cooperating together for the greater human good, especially in a post apocalyptic environment.  And that involves essentially rehabilitation rather than simply annihilation. 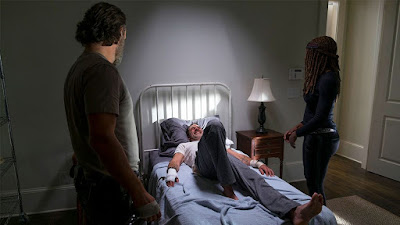 After this point, we see the immediate aftermath and wake of Rick's decision: Eugene and Rosita reconciling; Alden telling Maggie that he wants to help build Georgie's plans for the future, to which Maggie agrees to; Daryl dumping Dwight in the woods with a car and keys, telling him to go find Sherry (we see that he DOES go back to their home and she WAS there, evidenced by a note saying "Honeymoon Forever"); Morgan opting to leave his violent way of life behind and isolating himself at the junkyard, urging Jadis (aka, Anne, WTF double agent) to go and join Rick's new society; Father Gabriel visiting his old church and now able to see again (???); Tara and Rosita visiting the Sanctuary to aid them in rebuilding; Rick and Michonne telling a hospitalized Negan that he will be locked up for the rest of his days for what he has done.

The most jarring moment though, comes when we see Maggie back at the Hilltop in her office speaking to Jesus.  She tells him that the Saviors that they captured are truly an aid to the rebuilding efforts but that Rick and Michonne's decision to keep Negan alive is wrong.  Then she ominously adds that after rebuilding and restrengthening, they would "show them" how wrong they were.  To which Jesus nods in agreement and Daryl comes out of the shadows in vocal agreement.

This is essentially the end of the episode, and now with six months until season 9 begins, here are some points/questions that we will likely keep in mind:


In any case, we'll have a full 6 months to speculate.  All in all though, season 8 was a vast improvement over season 7 and after two full seasons of conflict with The Saviors, it was a resolution long overdue.  Now it's time to look to the future...whatever that looks like.