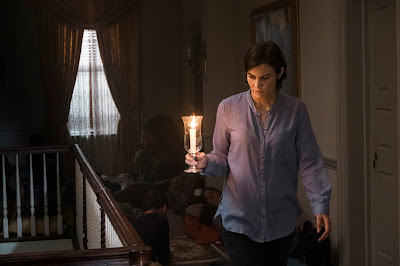 This past week's Episode 13 "Do Not Lead Us Astray" reflected on the cost of war and on how the consequences of Maggie's decisions specifically are weighing on her psyche.  We also got back to some old school Walking Dead where we had an internal walker outbreak, similar to the days of the Prison, when the flu outbreak was killing its residents (who subsequently turned).  We also were forced to finally say goodbye to a somewhat regular (and running joke) character, in the character of Tobin.  So let's explore.

As anticipated from the trailer, the episode picks up where we left off, with the understanding that the Saviors are en route to the Hilltop and that an attack is imminent.  But we also see a reoccurring image of Gavin, the Savior, who was killed by Henry in the mid-season premiere.  We see him taunting Morgan's thoughts, repeatedly saying "You know what it is" and "You were supposed to". 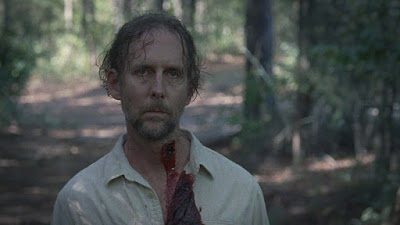 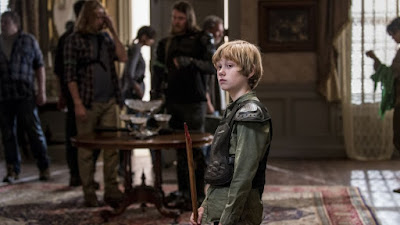 We see everyone preparing, including young Henry, who pleads with Carol and Ezekiel to please allow him to fight.  They both strongly deny the boy's request and tell him that he must stay in the house and protect those who will not be on the front lines to fight.  Eventually the signal is given that The Saviors are approaching (did anyone else's heart race when the signal started going around?) and Maggie readies herself for what's about to happen.

Immediately we see that The Saviors grossly underestimated the amount of preparation that the Hilltop implemented.  It seems that Simon anticipated simply riding through the gates of the Hilltop and is surprised when all their tires flatten, the result of running over boards with nails.  Via Walkie Talkies, Simon and Maggie have an exchange where Maggie tries to get Simon to back down by threatening the lives of the 38 Savior hostages currently in her possession.  In case we weren't abundantly clear by now on the extent of Simon's ruthlessness, he informs Maggie that those men are now damaged goods and he could care less what she does with them.

I have to give it to Maggie though, since she didn't even flinch at their response.  Also, as an aside, how cool is it that she goes by "The Widow"?  Gives me flashbacks to the movie "Kill Bill" with its main character "The Bride".

Moving on, Dwight tries to make a last ditch effort with Simon and asks him if he really wants to go through with this attack bearing in mind that somewhere out there, Negan could very possibly still be alive and could come down with a vengeance on Simon for disobeying his orders.  To which Simon responds with the very prolific line that "It's better to beg for forgiveness than ask for permission". 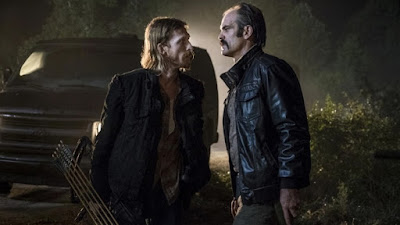 But before the Saviors can blink, Daryl shows up on his bike shooting his gun at the Saviors, a ploy, as we later realize, to draw them in.  That is exactly what the Saviors do and a bus is immediately rolled out in front of them to "T-Bone" their vehicle.  Maggie then gives the signal and the Hilltop immediately opens fire on the Saviors, much to their surprise.  Eventually, the Saviors get their bearings and start firing back with their contaminated weapons in hand.  We see several Hilltop members injured during battle, including Tara.  Simon was about to sneak up on Tara and kill her with his hatchet but Dwight interjected and shot her with an arrow. 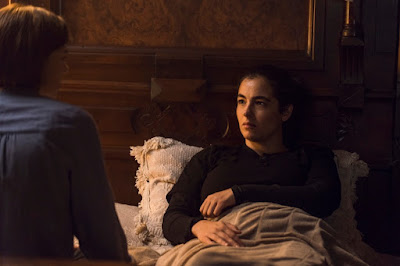 Based on what we have seen (and what we know from the comic, *SPOILER*), it is highly unlikely that Tara is infected.  The most likely scenario is that Dwight shot her with his clean arrows, in order to prevent Simon from attempting to take her out himself but try explaining that to Daryl who is convinced that Dwight had malicious intentions.

After some back and forth, Morgan and Rick bring up the rear and eventually drive the Saviors into retreating from battle.  Maggie and Rick race after them in futility, particularly since Rick informs Maggie that Negan wasn't even with this crew.  Maggie is beyond frustrated since we realize that she wants to be the one to take out Negan, at any cost.

Once the battle is complete, the tally is taken and everyone takes a moment to reflect on the losses and lick their wounds.  Maggie offers to Al (the sweet Savior who keeps trying to appeal to her better senses) an opportunity to bury his "people" but he makes it very clear that these are not his people.  The fact that Simon would turn his back on them, being the ultimate deciding factor.  In the aftermath of the battle, everyone comes to Maggie, praising her on her leadership but she is not so convinced she is such a great leader.  This is mostly because she knows she is putting people's lives on the line in order to avenge her dead husband, more than anything else. 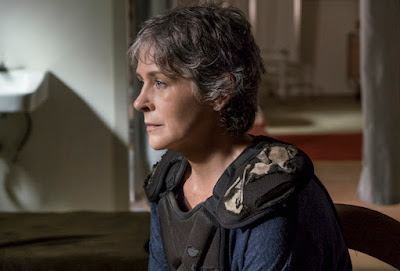 Nightfall comes and all those who are injured are being cared for, including Tobin.  Tobin, who suffered a midsection stab wound, is recovering by having a heart to heart with Carol, of all people.  Carol who left him in the middle of night with just a note left behind.  He tries to find out from her if it was all just an act and she is truthful with him about her confusion and how much she wanted it to be real, but in this world, that's a tall order.  Ultimately, her conversation with him gives him some gentle closure on their relationship.  How fortunate for his soul.

This is because we see the lapse of time and realize that Tobin passed away from his wound and is now a walker.  He goes on a tear (no pun intended) causing chaos within the house, along with several other Hilltop members that are now walkers as well.

Now, how NO ONE stirred when one of these walkers rolled down a flight of stairs into a group of sleeping Hilltop members is beyond me.  Maybe everyone is deaf from all the years of gunfire?

In the meantime, young Henry who was supposed to be inside the house offering protection, instead manged to sneak out of the house and to the Savior prisoner pen, still looking to find out who killed his brother.  In youthful impulsion fashion, Henry proceeds to UNLOCK the pen to enter (yes, he's armed but all the more reason to shoot through the fence rather than ENTER the pen).  As the prisoners become aware of the mayhem at the house, Henry is quickly overwhelmed by Jarrid (the Savior who DID in fact kill his brother) and has his weapon stolen from him.  Jarrid and several Saviors run with him although it must be said that Al and several other Saviors opt to STAY and even defend the gates to keep more walkers from entering the Hilltop.  This is a point that Al makes very clear to Maggie. 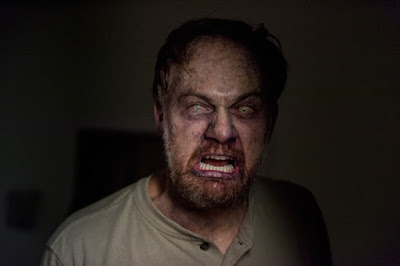 In any case, eventually our heroes manage to restore order by putting down all the Hilltop members that had turned including of course Tobin.  Carol ends up being the one left with the task of putting him down and we can see that she has a moment of deep thought, as she tries pushing Tobin away.  She of course eventually goes through with it but if I'm to be totally honest, there was a moment where I was afraid we were going to get a version of Carol's demise in the comics (*SPOILER ALERT*).  Thankfully that did not happen.

Eventually Rick and team realize the Negan's weapons were in fact, contaminated and that is why so many of their people succumbed to their injuries.  The show tries to leave us to wonder if Tara is also infected (though again, not likely, particularly since she hasn't displayed any signs as of yet) and/or if RICK potentially could've been infected (there is reoccurring mention of an injury on his hand). 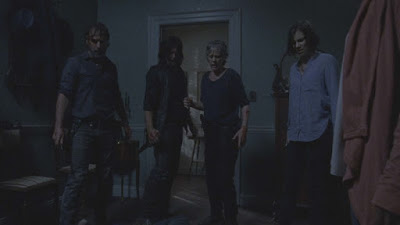 At the end of the episode we see that Maggie is at the grave site taking stock of how many more members of their side passed away.  As we see that the number has grown, we realize that Maggie is no longer sure if the cost outweighs the ultimate goal.