Well, we all knew it was coming.  We had (2) months to prepare ourselves for it.  But when the time came, the emotional impact was still felt.  The Walking Dead's mid-season premiere, entitled "Honor" did exactly that:  It honored the life and contributions of Rick Grimes' son, Carl Grimes.  The episode actually explored a few story lines simultaneously, including further exploration of the "Flash Forwards" so let's get into it.

We start the episode going back into the past, before The Saviors arrived and torched Alexandria.  This gives us the opportunity to see HOW exactly The Saviors escaped The Sanctuary and diverted the walkers (FYI, they employed the use of The Fat Lady) and, in relation, how Morgan inevitably found himself at The Kingdom. 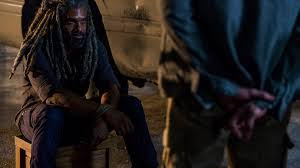 As we last left off, Ezekiel is being held by Gavin and his Savior outpost that is most closely affiliated with The Kingdom.  Ezekiel keeps trying to impart some wisdom on Gavin, in an attempt to reach him and offer him a way out of this situation.  Gavin speaks to him as if this IS the only way and that Negan will inevitably win, so they have no choice other than to lead him to certain death (but with a pillow so that he's not, you know, uncomfortable).  You keep getting the impression that Gavin doesn't REALLY want to do this but his fear of the unknown far outweighs his desire to venture out on on his moral conscience.

He doesn't have much time to really think about this however, since Carol and Morgan are at the Kingdom's doorstep and it doesn't take very long for them to make quick work of these Saviors.  This is particularly the case with Morgan, who kills his victims in some of the most brutal ways we've seen, including, literally reaching into a man's open wound and pulling out his intestines.


I honestly can't believe I just wrote that, but yes, that really did happen.  Word for Word.

Inevitably it becomes a showdown between Morgan and Gavin, and Morgan's morality is fiercely tested.  We can see him torn and unsure of what to do.  After much deliberation, he finally decides that he MUST kill Gavin....only to have the task handled by Henry, the brother of Benjamin (the Kingdom knight killed by this particular Savior Outpost).  This shakes him to his core and will likely have future repercussions on how he chooses to move forward.

The real heart of the story however, is of course, is the death of Carl.  One might say that this death was perhaps a little TOO dragged out, since we spend a good 90 minutes on his demise, ultimately succumbing to his walker bite toward the tail end of the episode.  At one point, I think I thought to myself, oh my God, are we not going to get to this death in this episode?  But we do (thank God). 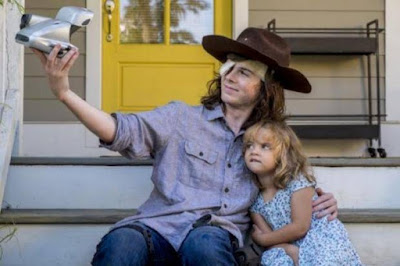 We get a complete picture of Carl's last day(s), starting with the WHEN and WHERE did the walker bite occur.  As most of us suspected, the bite occurred during his scrimmage with Siddiq and the walkers that overcame them.  From that point, we see Carl comes to terms of the inevitable fact that he will soon be passing away from this: He puts on a clean shirt, spends some adorable brother/sister time with Judith, writes letters to all his loved ones (my suspicion is that those letters will cast a tone over the rest of the season, not to mention that one those letters could have potentially been written to Negan himself), and helps get Siddiq situated, before he is gone.

We then join Carl where we last left off, in the sewers with Michonne and Rick.  They are notably shocked at Carl's wound but with the Saviors bombing Alexandria, they ultimately have nowhere to go and nothing to do, other than make Carl's final moments as comfortable as possible.  Carl's final moments alive are filled with wisdom, including some thoughts that he imparts on Judith, before she is taken away by Daryl (Daryl gives Carl credit on saving everyone but geez, I kind of thought they would have more of a MOMENT you know?).  He informed her that he wasn't able to beat this world, but SHE will.

Do you think that's the end of the show?  Judith walking the wasteland, the future leader of humankind (aka, like John Conner, Terminator 2)?  Something to think about it...

We also get an amazing heartfelt monologue from Siddiq, who we learn was a medical resident before the apocalypse (I'm thinking he's going to be sticking around for awhile), but he also says that he will spend the rest of his days honoring Carl, and everything that he believes in.  Carl spends the rest of HIS time on earth in an attempt to talk Rick out of his current wrathful state even as far, as walking him through his fantasy...aka, the "Flash Forwards".  We come to realize that those images were all the visions that Carl pictured, in his ideal world, including an adorable Judith greeting a now farmer Negan, tending to their crops. 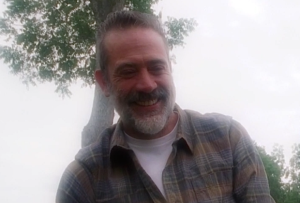 Does this mean that this is NOT a representation of the future?  Not necessarily.  By explaining that these visions are Carl's visions, but with Rick adamantly promising that he will "make them real" it opens the door to a VERSION of Carl's future.  I still feel that we will get a time jump and see a future Alexandria that is rebuilt and thriving...but you know, Negan may not be picking strawberries with them in the fields.

As Carl's condition worsens, Rick and Michonne opt to bring him to a nearby blown out church in order to lay him down to rest.  One of the big looming questions leading into this episode was who would put down Carl?  Will it be Rick or Michonne or someone else altogether?  As it turns out, Carl had the maturity and the sensitivity to decide to shoot himself and spare his closest loved ones from having to do the unthinkable.  The scene when Rick and Michonne are standing outside waiting and we see their devastation when we hear the singular gunshot, was as painful to watch as viewers.  We didn't need to SEE the action, to feel the impact.

At this point, we see Rick and Michonne digging Carl's grave but we also see again the same future bleary eyed Rick from the (not so distant) future.  We see that he is alone and sitting under a tree with stained glass panels hanging from the branches, muttering, "My mercy prevailed over my wrath".  He is also nursing a nasty bloody wound on the right side of his body.

So what does this all mean?  Clearly we are slowly but surely marching to the answer to that question.  Here's hoping we get to the answer BEFORE the season finale.