[CAROL'S COMIC CORNER] Season 8, Episode 8 of The Walking Dead, "How It's Gotta Be" 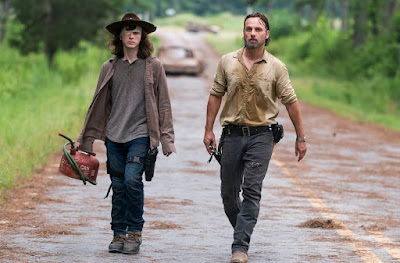 We finally land at the mid-season finale entitled, "How It's Gotta Be", an episode that follows the comic very closely...and then dramatically veers left, throwing comic readers and viewers alike for a shocking loop.

The episode continues from the point that Rick realizes the Walkers have been diverted from The Sanctuary and The Saviors have escaped.  He is picked up by Carol and Jerry, who all inevitably split up and feverishly run to each of the communities, to prepare for the inevitable retaliation.  We get to see each of the community's deal with the Saviors' wrath (The Kingdom being overtaken by The Saviors completely, The Hilltop having their weapons seized and a man killed while their convoy was on the road).  The most significant of confrontations being of course, the arrival of The Saviors at Alexandria and the eventual utter bombing and torching of the entire community to the ground. 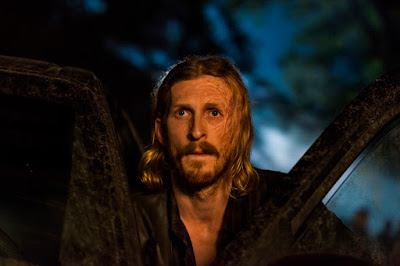 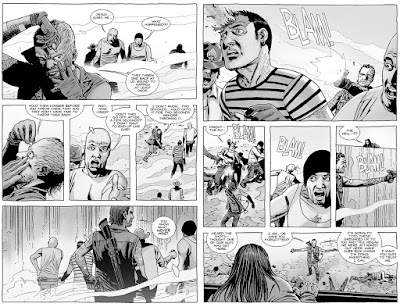 To begin with the similarities, Dwight's betrayal of his fellow Saviors was accurate to the comics.  In the comics, Jesus is shocked to see that Dwight is indeed on their side, since he notices during battle that Dwight clearly turn on his own men.  This happens on the show, but in the presence of Daryl, Rosita and Tara.  It is to be noted however, that Laura, a fellow Savior, did notice that Dwight is the traitor among them and escaped.  So it remains to be seen what significance that will play in the future.

In addition, we start seeing how Eugene will likely aid the doctor and Father Gabriel in escaping from The Sanctuary.  This is similar to the comic, since it is Eugene and Dr. Carson that work in smuggling various individuals (including themselves) from The Sanctuary and back to Rick and crew. 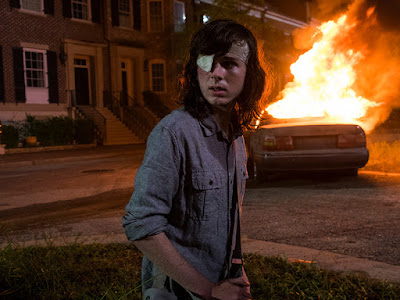 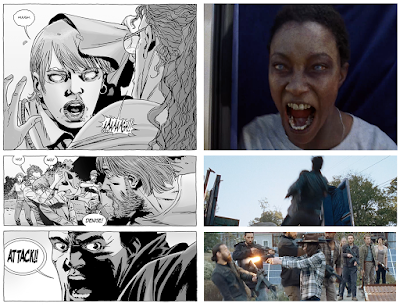 But let's move on to the heart of the episode: The Torching of Alexandria.  Many aspects of Negan's attack on Alexandria are indeed accurate but were contrived from the comic slightly out of time sequence and essentially "remixed" to adapt it to the show's progression.  Originally in the comics, Negan arrives at Alexandria unannounced when Rick and crew are first concocting their plan against The Saviors at the church.  He gets everyone's attention by throwing an initial bomb into Alexandria and then proceeds to negotiate a "peace offering" by returning Holly, with a bag over her head.  Once she is handed over and the bag is removed, it is revealed that she is a Walker and Negan uses this diversion to stage a full on bombing of Alexandria.  It is only the arrival of Maggie and the Hilltop that forces Negan and The Saviors to eventually retreat.

This was "remixed" in the show's adaptation since that attack was basically split up throughout the show.  The portion of the attack that included the returning of Holly happened last season when Negan returned a zombified Sasha back to Alexandria and the shock of her being a walker provided an opportunity for Carl to open fire and a full on battle began.  In the season 7 finale when this occurs, Negan is forced to retreat due to the arrival of Maggie as well as the arrival of King Ezekiel and the Kingdom (not to mention that awesome attack by Shiva, RIP). 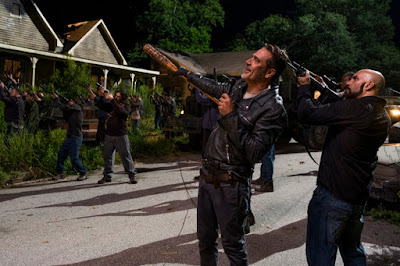 In the season 8 midseason finale, The Saviors proceed in bombing the living hell out of Alexandria after Negan and Carl have a fairly heartfelt exchange.  Once Negan realizes, however, that Carl is not being FULLY forthright and this part of a larger scheme to get the Alexandrians out of there before The Saviors could really do some damage, Negan is enraged and orders "Bombs Away" on Alexandria.   He does make it clear however that Carl is NOT to be killed and that anyone that comes across Rick should bring him directly to him.

Which brings us to the elephant in the room: Carl.  *SIGH* Where to begin with Carl...Let's start with the comic version.  In the comic, Carl doesn't play NEARLY as large as a role in this sequence as he does on the show.  In the comic, Carl is still very much under Rick and Andrea's care and he is by no means leading anyone anywhere.  On the show however, upon Negan's arrival, it is CARL who quickly comes up with a plan to get everyone out safely, as long as he can manage to distract Negan long enough, which he obviously does. 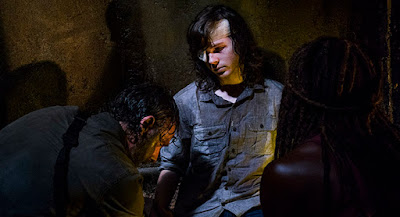 That is however, where the similarities end.  As we all know, by the time we get to the end of the show, we find out that the reason Carl was acting so bravely in the face of danger, mostly because he already knew that he was living on borrowed time.  As it turns out, Carl has been bitten by a walker on the abdomen, most likely during the confrontation he and Siddiq had with those random walkers (which was honestly a reckless move on both characters parts).  He is clearly feverish and starting to succumb to his wounds and we end the episode with Rick and Michonne kneeling at his side, within the underground sewer system, as Alexandria burns to the ground.

To be clear, (*SPOILER ALERT*) CARL IS VERY MUCH ALIVE IN THE COMIC VERSION, TO THIS DAY.  With that said, this deviation from the comic is by FAR the most significant.  The death of Carl is a major departure from the comic source material and will also set up a LOT of questions for the future of the show.  Most significantly is the much talked about "Flash Forward" scene at the onset of this season that showed an "Old Man Rick" living happily with Michonne, Judith (we think) and Carl. 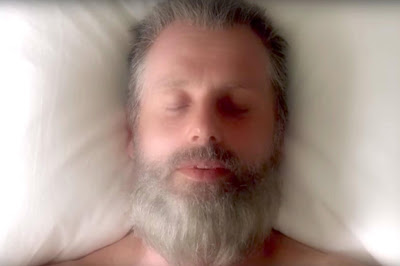 But since we know that Carl will not survive, what does that mean for that scene?  It can no longer be looked at a "Flash Forward".  And if that is no longer what it is, then what significance does that scene hold?  In addition, there is the the question of what will happen AFTER the war with Saviors is concluded.  In the comics, Carl continues to have a very close (almost familial relationship with Negan) and the next major story arc is HEAVILY reliant on Carl and his romantic relationship. 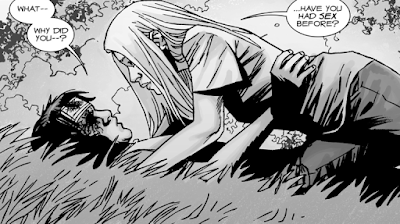 Without him present, it makes one wonder if this story arc might be skipped altogether in favor of moving into other comic storylines that may prove more enticing (i.e, that black helicopter, *cough cough*).  Many viewers/readers, would probably be disappointed however, since this is one of the groups/story arc's that many have been waiting for, almost as much as the eventual arrival of Negan.

At this point, all bets are off and we can only watch and see how the writers will choose to continue and eventually resolve this All Out War story arc, particularly in light of Carl's death.  Hopefully Sunday's mid-season premiere will give Carl the proper send off his character deserves. 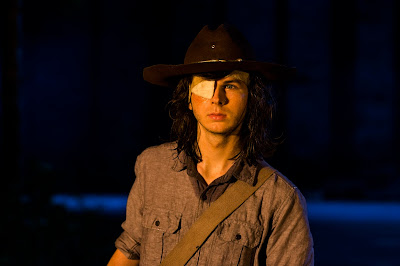 BE SURE TO WATCH "THE WALKING DEAD" MID-SEASON PREMIERE ON SUNDAY, FEBRUARY 25TH AT 9:00PM EST.  WE'LL BE BACK WITH PODCASTS & RECAPS IMMEDIATELY AFTERWARD.