As we approach the middle of season 8, we finally become reacquainted with our old friends the The Garbage People.  They are central to these next (2) episodes "The King, The Widow & Rick" as well as "Time for After".  In reality, however, they simply do not exist in the comic source material and therefore the comparisons are far and few in between in these episodes. 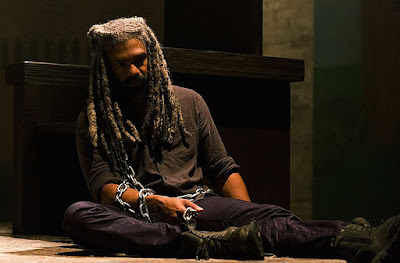 In regards to what was going on with other characters, and as was touched upon earlier, we finally saw the downtrodden King Ezekiel confess his depression to Carol.  He is still reeling from losing all of his Kingdom Knights during the attack on the Savior outpost where they were essentially ambushed.  Carol listens to him and emotionally pleads with him to not abandon his people and be the leader that they need him to be (that she needs him to be), in order to continue to provide this community with hope.

While King Ezekiel's interaction was very heartfelt and emotional, in the comic, it is far less so.  Since in the comic, King Ezekiel is in a romantic relationship with Michonne, he confesses his insecurities to her and she, well, punches him in the face and call him a p$%y.

Not necessarily as warm and cozy.

Moving onto the episode "Time for After", we get more insight to Eugene and Dwight's complicated relationship, with Dwight very much acting as a double agent, playing both sides and Eugene acting out now as very much a Negan devoted Savior (likely out of fear).  Eugene inevitably learns about Dwight's plan to assist Rick and crew to eventually fully destroy Negan and The Sanctuary, but unlike in the comic, he does NOT join the cause but warns Dwight to cease what he is doing.  That is the extent of Eugene's threat since he doesn't have the guts (no pun intended) to rat him out to Negan. 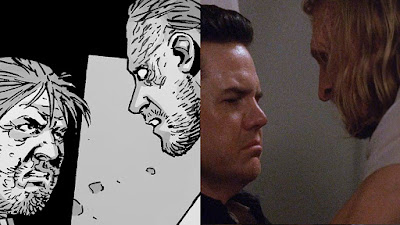 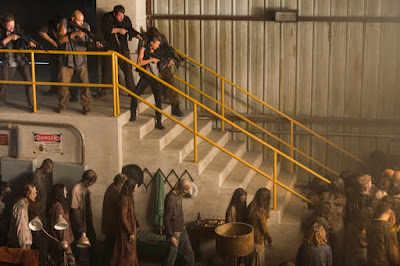 During this episode, we also find out that there is a side mission being spearheaded by Daryl and Tara who want to essentially go rogue and crash a truck into The Sanctuary walls.

This would allow the Walkers to stream in and effectively kill everyone inside.  They eventually carry out this less than well informed mission, crashing the truck and then fleeing the scene.

This bears some resemblance to earlier in the comic when Holly (Abraham's love interest), against Rick's wishes, crashes a truck into the Sanctuary but instead she is taken prisoner, killed and eventually delivered back to Alexandria as a Walker.  On the show, Abraham's love interest Sasha infiltrated the Sanctuary (rather than crashed a truck into it) and killed herself, before being delivered to Alexandria as a Walker, unbeknownst to Negan. 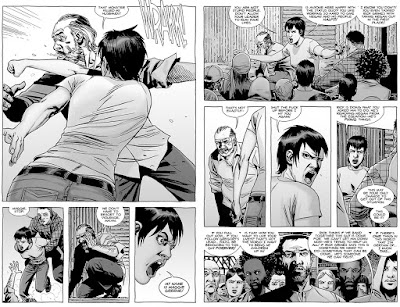 There are also some very subtle nods to the comic in this episode that pass by very quickly.  At one point, Rosita and Michonne are expressing to Daryl and Tara why they want to stick to Rick's directives and not go off on their own on this side mission.  Rosita very matter-of-factly states, "I believe in Rick Grimes".

This is actually a HUGE line in the comic, as part of a major speech that Maggie delivers to The Hilltop community to rally them around Rick's plan during the war. 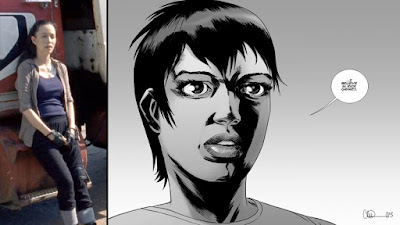 Personally, I feel that this line was wasted on the TV show and could have been better executed and given to Maggie in order to make her presence more significant (rather than secondary).  But oh well. 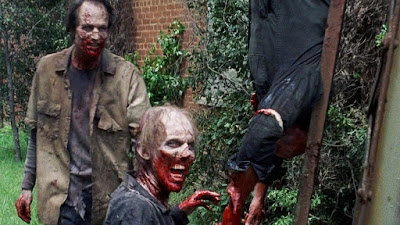 There was also a teaser inserted at the end of the episode, when Rick and The Garbage people approach The Sanctuary.  As Rick starts to approach one of the look out points, he notices one of his snipers hanging upside down from the telephone pole, being eaten by Walkers.


***SPOILER ALERT*** In the comic, this is precisely how Father Gabriel dies during the war with The Whisperers. He falls from the post and is stabbed by Beta (the second in command of The Whisperers) before being devoured by the Walker herd following them. 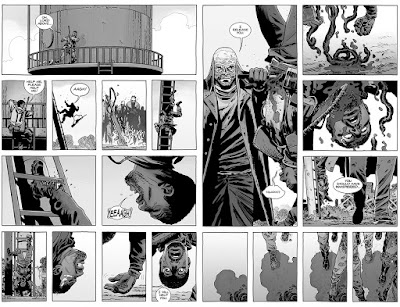 Premonition that The Whisperers are coming?

NEXT TIME: CAROL'S COMIC CORNER COVERS EPISODE 808 (HOW IT'S GOTTA BE)