[CAROL'S COMIC CORNER] Season 8, Episode 5 of The Walking Dead, "The Big Scary U" 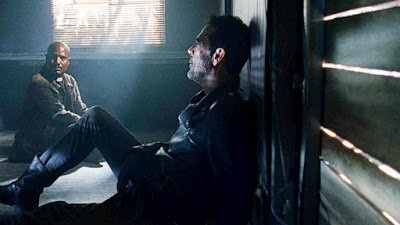 In episode 805, entitled "The Big Scary U", we finally got the long awaited Negan-centric episode we've been longing for (or was that just me?).  This episode provided some much needed depth and dimension to our newest villain that added a layer of complexity to the character and, most likely, began the framework and argument for why the show will likely NOT kill him, come the end of the All At War story arc (much like what occurs in the comic).

This episode primarily centers on the dialogue between Father Gabriel and Negan, as they are trapped in what appears to be a General Construction trailer right outside The Sanctuary walls.  This is due to the swarm of walkers that has descended onto the Sanctuary after Rick and Team's offensive attack at the onset of the season.  Negan immediately disarms Father Gabriel (not like he was a serious threat, come on) and they then choose to wait it out until the Saviors manage save them (Negan thinks).  As they wait longer and longer, the trailer becomes a sort of "confessional" for Negan who decides to confess his deepest regrets to Father Gabriel, when it starts to look as if they may not make it out of this situation alive.  He doesn't regret any of the people he's killed but rather who he COULDN'T kill: His sick wife.  Apparently, before the Apocalypse, Negan was a married man, though admittedly a philandering husband, who was running around on his terminally ill wife.  Upon her hospital death, he could not bring himself to fully put her out of his misery, since at that point,  she turned, as everyone else at that point when they passed away.  Instead he ran and left her in the hospital. 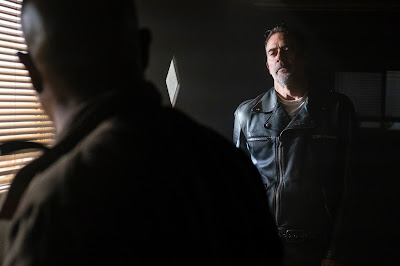 This is his only true regret, and we see the emotion resonate on his face and he explains all this to Father Gabriel through the barrier of a door within the trailer.  Upon his confession, Father Gabriel opens the door and the two plot their escape from the trailer and make their way back into The Sanctuary (after, you know, Negan punches Father Gabriel in the face).

This background information coincides with Negan's history that is illustrated in the comic, albeit in a different format. 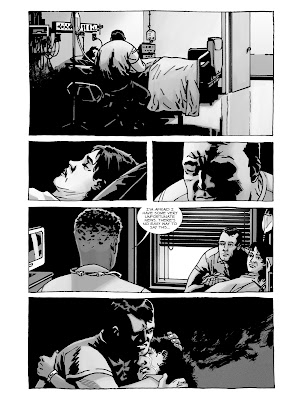 In the comic, Father Gabriel and Negan NEVER interact and this whole "confessional" scenario never occurs.  Instead, the reader learns about Negan's backstory through a separate number of issues that run parallel to the comic story line (sort of like when we all of a sudden got a Morgan backstory episode for example, like "Here's Not Here").  In those issues, we learn that Negan was a school teacher, before the apocalypse,  He was indeed married and although he loved his wife very much, he was not able to remain faithful to her, even through her sickness.  He is by her side, however, in the hospital during her last few days and moments and is there when she inevitably dies and turns.  Negan, stricken with shock and grief, cannot bear to kill his now walker wife and he leaves her behind (not all that similar to Morgan's situation with his own wife).

Oh and by the way, Negan's wife's name was Lucille.  It all makes sense now right? 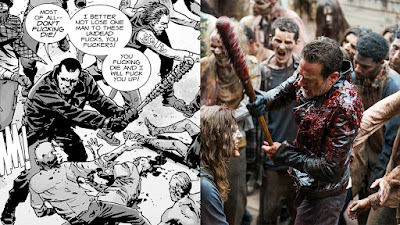 Beyond that, though, there weren't too many other direct similarities to the comic.  Some of the fighting that we see when Negan and Father Gabriel escape the trailer and start fighting off the walkers can be compared to the moments in the comic when Rick's walker herd first descends on The Sanctuary.  In the comic, Negan doesn't get trapped in a trailer but rather fights off a considerable amount of walkers before being trapped inside the Sanctuary with the rest of his Saviors (much as Simon and his lieutenants are during the duration of this episode). 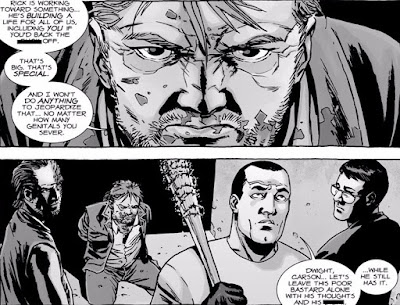 Perhaps the biggest DEPARTURE from the comic source material is the TV interpretation of Eugene versus the comic version of Eugene.  On the show, Eugene is a spineless coward with moments of bravery but by far, most of us can agree that he is the weakest link.  In the comic however, Eugene is DEFIANT in Negan's presence, even as his prisoner.  While I have a feeling that we likely see more moments of bravery from Eugene, he will likely never mimic the courage that his comic counterpart exhibits.

This episode however was very much all about Negan (he is after all, "The Big Scary U") and, as already stated, started to lay the very important groundwork for humanizing his character and making a case for how he and Rick are perhaps not THAT far off in their intentions.  My thought is that we will continue to see more of this development in the second half of the season, especially in light of Carl's imminent death and the effect that will have on his conscience. 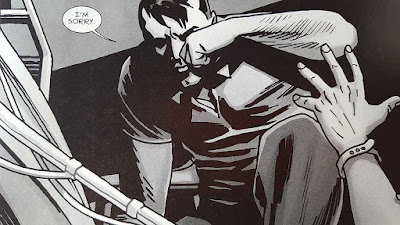