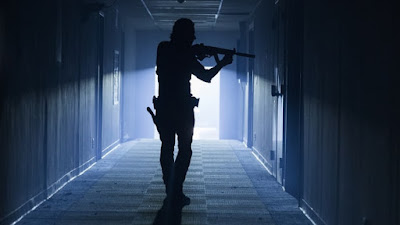 Before starting this blog post, I just want emphasize the importance of rebooting your websites (whether Blogger, Tumblr, etc).  I made it a point to stay up until almost 2AM EST last night, after my children went to sleep, to finalize and upload this latest Squawking Dead blog post, only to press PUBLISH...and have the site freeze on me. Despite periodically SAVING the post, I'm guessing because I had the window open for some time, I must've been logged out.  Hence NOTHING SAVED.  So here I am, trying to recreate the magic from scratch again so bear with me.

In any case, in preparation for the upcoming Walking Dead, mid-season premiere on February 25th, we're going to keep going through each episode and comparing it to its comic counterpart, as a refresher to what happened and what could POTENTIALLY happen.  In this post, we're going to focus specifically on episode 802 (The Damned) and episode 803 (Monsters). 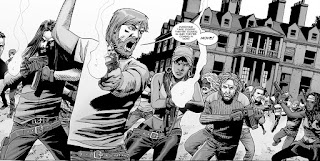 These were (2) episodes that pulled from the comic source material but in a very GENERAL way.  Meaning, that the overarching, consistent fighting and battle lines being drawn are heavily depicted in these (2) episodes.  If last season could be accused of lagging and containing a lack of action, the beginning of Season 8 was quite the opposite with non-stop action and firefights throughout.  This obviously is consistent with the All Out War story arc (some would argue on another level). 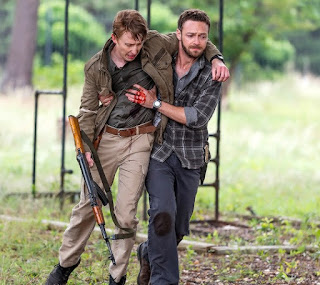 A specific incident pulled directly from the comic, however, is the death of Aaron's partner, Eric.  Fans had been speculating and awaiting his death, mostly due to the fact that in the comics, he dies during battle with the Saviors.  In addition, the general perception of the TV version of Eric was that he was weak and feeble and not likely long for this world.  When it came time to kill off Eric however, it deviated from the comic, in the sense that the TV version was far more subtle than in the comic.  In the comics, Eric is shot in the head and killed instantly.  On the show, Aaron (and viewers) do not immediately realize that he has been mortally wounded until after the fact.  Aaron gingerly brings Eric under a tree to "recover and rest", and we are still not fully sure that Eric will die. 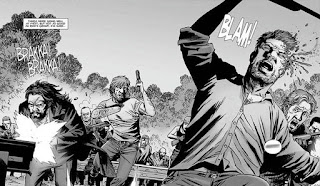 It isn't until Aaron returns to the tree to see that Eric is gone, leaving a trail a blood behind him and in the distance, we see a presumably Walker-Eric stumbling slowly to join another Walker herd.  It was actually quite a poignant and well done end to Eric's life (very similar to the opening credits with the random Walker stumbling through the fields).

In addition, we had the return of Gregory to the Hilltop community in the third episode entitled, "Monsters".  This was also taken straight from the comics, with Gregory sheepishly and desperately attempting to return to his former community, after being rejected by The Saviors.  Both on screen and on paper, Maggie shows her own level of mercy by allowing Gregory to return, something that in the comics, at least, comes back to haunt her.

Otherwise, these particular (2) episodes focused more than anything on combat in order to relay to viewers how this is very much a WAR with various BATTLES that will continue until there is a resolution.  That said, there are some key moments during this war that occur in the comic and are in fact depicted on the show and we will of course, cover those in greater detail as we get to them.