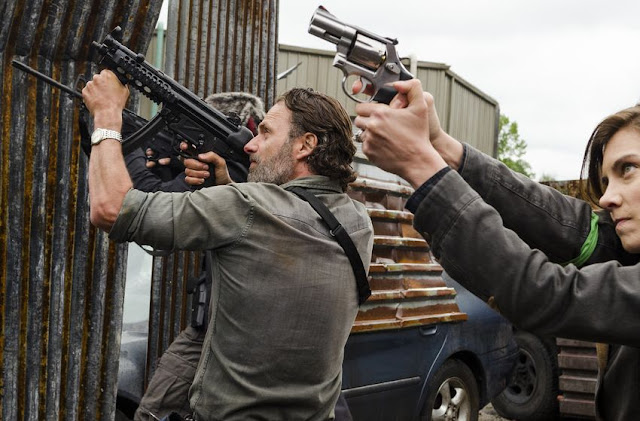 As we started off the 100th episode of the The Walking Dead (Season 8, Episode 1: Mercy), the writers and producers took the opportunity to include numerous call back's to the comics, as well as some classic earlier moments from the show, which we'll discuss in a separate posting.  But let's start at the beginning:

This episode is very much a Rick Grimes episode and it sets up Team Grimes on the offensive against the Saviors, taking the battle straight to Negan's homebase, The Sanctuary.  This is fairly similar as it occurs in the comic, with Rick, Maggie and company rolling up to gates and shooting their guns in the air to demand Negan's attention: 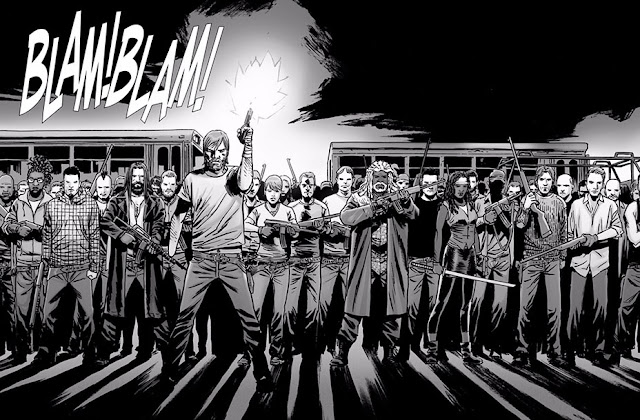 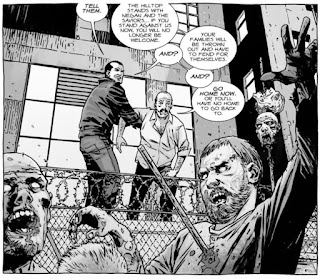 As he comes out and stands on his balcony, Negan's stance from The Sanctuary with Gregory in tow is also identical to the comics.  The only exception to this is the presence of Simon, since he simply does not exist in the comic version.

In both comic and screen case, Jesus' response to Gregory's call to "STAND DOWN" was consistently the same, in pledging his loyalty to Maggie and the Hilltop, and shrugging off Gregory's banishment of them from The Hilltop as simply a place where all he had were "a bunch of books".  This is all for disobeying Gregory's "orders". After Rick lands the seemingly final blow by breaking through the Sanctuary gates and letting walkers overrun the premises, at the very end of the episode, we realize that Negan and Father Gabriel are stuck in a trailer together.  Negan then utters the classic line of, "I hope you have your shitting pants on...Because YOU are about to shit your pants".  This line is taken practically word for word from the comic and applied to the screen version.  The difference being though that in the comic, Negan is uttering this line to Dwight and his fellow Saviors, as he notices the herd of walkers closing in on the Sanctuary (not a trailer). Some of the vulgarity is toned down as well, for the screen version.

Finally, we cannot talk about the episode "Mercy" and not discuss the obvious.  I'm clearly talking about the big elephant in the room which are the "Old Man Rick" montages scattered throughout the episode.  The last, and longest, montage in the episode shows what appears to be a much older version of Rick, with a crew cut and beard (Rip Van Winkle-like, if you will).  We see him in what appears to be a bedroom and as we pan the room, we notice a close up on a clock, flowers on a nightstand and a cane all within the same room.  He gets up, with his cane, and walks into the living room where a Michonne is sitting and drinking coffee/tea, Carl walks on through and an older Judith appears to come out to greet Rick.  She then takes him by the hand, talking about an upcoming festival, and they walk to an open front door where we can see a prospering Alexandria with infrastructure, agriculture and a thriving community.  All within a foggy dreamlike sequence.

SO.  What does it all mean?  And is there any reference in the comic to all of this?

The answer is a resounding YES.  In the comic, after the war with the Saviors has concluded, we jump forward in time, a good number of years into the future.  When we rejoin Rick in the future, he looks very much like the Old Man Rick we see in the episode.  He uses a cane due to an injury sustained during the war but overall, life is good.  At this point, the rebuilding has concluded and the world has learned to live WITH the walker threat, rather than always viewing them as a matter of life or death.  Homes and buildings have been rebuilt, roads and trade routes established, and life is flourishing again once more.  Unfortunately, in the comic, this festival that's mentioned is the deadly introduction of The Whisperers, a group that many fans are eager and/or apprehensive over.  For those of you who are NOT familiar with the comics and are NOT aware of who The Whisperers are, let's just say that their introduction in the comic leads to The Walking Dead's own "Red Wedding" moment.  It's horrifying and shocking and a jolt from the peace that Rick was able to create after the war.

But is this what's in store for our heroes on the SHOW?  That's very much up for debate since now, with the revelation that Carl has been bitten and is clearly on his deathbed, the "Old Man Rick" visions can no longer be flash-forwards.  Carl's inevitable death would null and void those images as reflections of the future, but perhaps they are images of what COULD have been.  Also, the little girl in this sequence is never referred to as "Judith" by name and she is seen holding the same stuffed rabbit as Baby Gracie from the Sanctuary.  This has led many to suspect that that is NOT in fact Judith but an older version of Gracie.

But then what happened to Judith?  Is she still safe?

Now more than ever, those questions especially loom tall over The Walking Dead and it seems that we'll need to wait and see what all this "Old Man Rick" imagery actually represents. 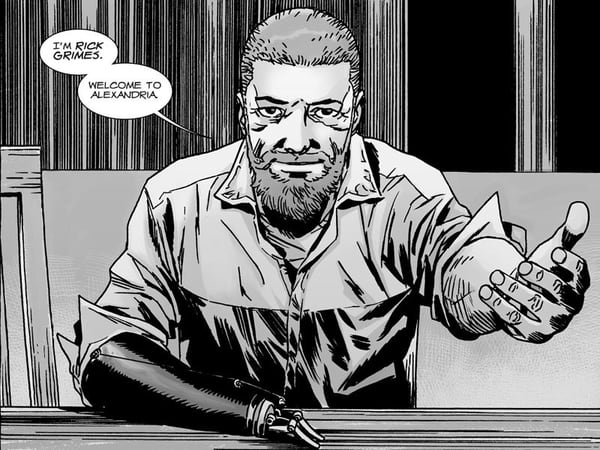 Posted by SQUAWKING DEAD on Tuesday, January 16, 2018 No comments:

SPOILER ALERT!  Just because The Walking Dead's not on doesn't mean we don't have anything to say about it!  As promised, until the mid season premiere on February 25th, we will be evaluating each episode from the first half of the season and comparing them to their comic equivalents.

It goes without saying that if you would prefer to steer clear of spoilers, it would be best to NOT read these pieces.  For those of you who DO elect to read them, ENJOY!
Posted by SQUAWKING DEAD on Tuesday, January 16, 2018 No comments: