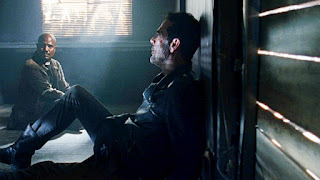 At the beginning of this much anticipated (and much hyped) new season of The Walking Dead, Robert Kirkman and Scott M. Gimple promised a raucous and action packed start which is entirely what we have received for the past few episodes.  Now that we have arrived at Episode 5, "The Big Scary U", the show scaled down the action dramatically to offer a much needed character study episode surrounding its star villain, Negan himself.  And after much anticipation, we finally got a chance to see the answer to the burning question we've had in our heads since the 100th episode premiere: What in the world happened to Negan and Father Gabriel since getting trapped in that trailer?

The show starts off by showing us a brief moment of Father Gabriel in church, by himself, telling God that he doesn't fear death anymore as he used to.  His fear now is a "fruitless death" and how if he's going to die, he wants it to be with a purpose.  If that's not foreshadowing, I'm not sure what is.  Remember this moment folks because Father Gabriel is likely not long for this world for too much longer. 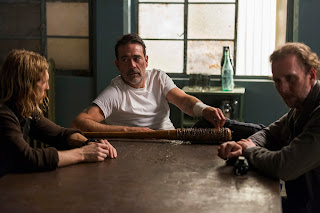 Moving on, a major strength the show has always had is being able to illustrate jumps in time exceptionally well and here is no exception.  The next moment we see is Gregory at the Sanctuary, speaking to Simon.  Well, more so expressing his undying allegiance to him and The Saviors.  Simon hears him out but states that he will need to speak directly to this boss (because middle management exists, even in the post apocalyptic world).  In the next scene we have all the lieutenants sitting in their own "conference room" of sorts with Negan at the head of the table.  It becomes clear that Negan isn't fully buying Gregory's devotion to the Savior cause (as well he shouldn't), as he tells him that he gets the impression that he's playing both sides (which is true).  Simon tries to back up Gregory, even going so far as to say that if the Hilltop does NOT obey Gregory's order, they will show up with a show of force and kill everyone in sight if they need to.  It's at this point that we see Negan slam Lucille (his bat, for those who aren't familiar and if so, why in the world are you reading this?) consistently on the table and make it clear that they are NOT to go in and arbitrarily kill people because as he repeatedly says, "PEOPLE ARE RESOURCES".  This very important point illustrates how regardless of how much of a sociopath Negan may be, there is a method to his madness.  We even get the impression that there is some sort of history between Simon (the right hand man) and Negan, particularly when Negan asks him if he's "backsliding" and if he's forgotten what "this" was all about.  I'm hoping we'll get more on this backstory later...

But it's at this point, that gunshots are heard and we understand where we are in the timeline: This meeting took place the day that Rick and crew stormed the Sanctuary.  We get a brief glimpse of the moment Negan and team stepped onto the balcony to confront the situation and then we fast forward to where we left off in the season premiere: Negan and Father Gabriel in the trailer. 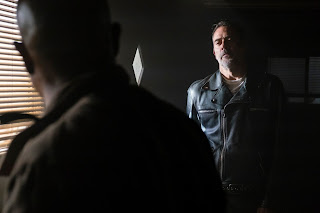 Negan wastes no time in tackling Father Gabriel to the ground, disarming him immediately.  He informs him that they'll need to wait this out, to see if The Saviors can break them out.  As they sit there, Father Gabriel discovers what he feels is is his purpose and he believes it is to take Negan's final confession.  We then spend most of this episode with Negan and Father Gabriel, in the trailer as walkers start to break through.  We learn some interesting things in their exchange to bear in mind for the future: Negan worked with kids in the past, before the apocalypse (perhaps Vice Principal that also coached?).  Negan does not feel any remorse whatsoever for the murder of Abraham and Glenn, because he says that Rick got them into that position (kind of true, to an extent).  Negan feels that he needs to get back to The Sanctuary as soon as possible because without his leadership, he feels that they'll succumb to attacking each other like a bunch of wild jackals (very true).  But one of the most enlightening moments is when Father Gabriel apparently hits a raw nerve by questioning Negan on his "wives" (to which he responds by saying each lady has a choice in the matter) but going as far asking him if there was a wife BEFORE all this.  And was he faithful to her?  This is the second time on the show that we see Negan ask Lucille to "give him strength" essentially to not kill Father Gabriel right then and there.  What ultimately ends up happening is "Negan's Confession" where he DOES confess to being unfaithful to his then ill (and presumably dying) wife, who he could not bring himself to put down, even after becoming a walker.  A situation very similar to Morgan's own situation (coincidence?).

After Negan confesses, Father Gabriel breaks out of the trailer bathroom and the two get to the task of covering themselves in the guts of walker that Negan drags in, in order to pull a Walking Dead classic move: Covering yourself in walker guts to throw off the walkers.  We end up seeing Negan and Father Gabriel deftly moving among the walkers until they have to start fighting back as a team, Negan even going so far to save Gabriel when at one point he falls. 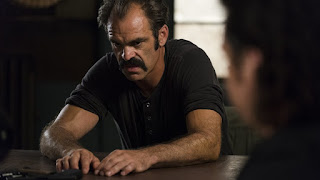 Within the Sanctuary itself, we see that the natives are getting restless (literally).  Among the top of the brass, we see that the lieutenants are trying to figure if Negan's dead, what happens now?  They are trapped with the walkers swarming the Sanctuary and have gotten to the point of shutting down resources such as the AC to preserve fuel and power.  Think about that point for a moment:


IN THE POST APOCALYPTIC SOUTH, THE SAVIORS HAVE CENTRAL AIR.

That makes for a pretty compelling case on why they have so many on their side, as it is.  But that's besides the point. 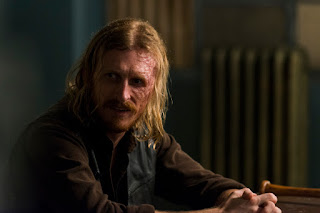 Among the top of the staff, it is clear that they are trying to determine who the mole is within the Saviors that got them into this situation.  As to be expected, most suspect Eugene, since he DID come from Rick's camp.  Dwight does come to his defense which Eugene later thanks him for in his room.  This interaction eventually supplies Eugene with the pieces that he puts together to realize that it's actually Dwight that is the mole within The Saviors.
What he will do what that information is still left to be determined.  Eventually the workers start to get restless at the conditions they are having to contend with (even though they are providing the labor expected) and are wondering where Negan is and if he is alive.  Simon tries to quell this potential uprising but someone in the crowd inevitably takes a shot and Regina (one of the lieutenants) immediately executes this individual.  It's at this point, that we hear the infamous Savior Whistle (which is pretty cool, honestly), everyone genuflects and Negan shows up with Father Gabriel in tow.  He puffs out his chest and demands a word with this right hand man and Father Gabriel is gingerly taken away.

Weaved into all of this, as a small side story but not to be neglected, is Rick and Daryl, picking up on where we left off after the assault on the Saviors carrying the 50 caliber weapons.  The Savior is eventually killed, but before that, they learn that everyone from the Kingdom (soldiers wise) were killed.  They see that beyond the guns, the Saviors also have explosives that Daryl feels should be used to blow the Sanctuary wide open in order to guarantee an immediate surrender.  Rick is not in agreement however, since there are workers and women and children within the sanctuary but at this point, Daryl looks at all innocent bystanders as collateral damage (much like Simon, as a matter of fact).  They reach an impasse and even end up coming to blows believe it or not, with Rick throwing the bag of explosives out of Daryl's reach...that promptly leads to the car and all its weapons going up in a spectacular fireball.
.
Rick then informs Daryl (after some awkward silence) that he's going to continue on the mission by himself.  He starts walking and notices a black helicopter flying overhead.

Your mind at this point should be saying, WTF???

Finally, we come to find out that Father Gabriel was put into a cell and Eugene has come to bring some comfort elements (much as he did with Sasha).  Unfortunately, we see that Gabriel is feverish and sick, deliriously talking about how they have to get Dr. Carson to Maggie immediately.  Hence my earlier prediction on Father Gabriel's death and foreshadowing.

PREDICTIONS FOR NEXT WEEK: Based on what we see for the teaser, we will be seeing characters we haven't seen in some time (Carl, Michonne, Rosita, as well as Maggie & Jesus).  It also seems that Tara and Daryl come to an alliance on taking stronger action toward the Saviors.  This doesn't sit well with me, since I really hope these two don't go on a Sasha/Rosita type suicide mission (because we all know how THAT ended up).  But I guess we'll get more insight into all that.

Also, expect in the coming weeks for Eugene take on a more definitive role in getting Dr. Carson back to the Hilltop, possibly with Dwight's assistance.